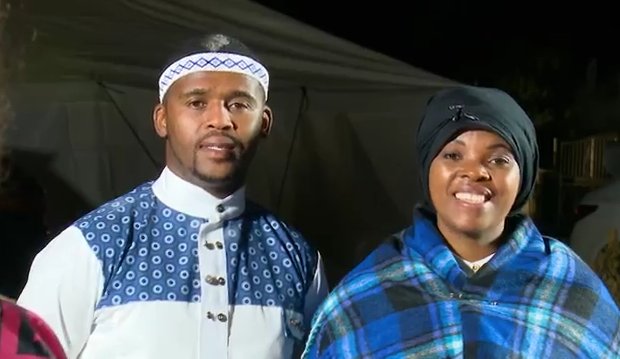 OPW's Luxulo and Noluthando tied the knot on national TV for all to see her "imported" dress.
Image: Via Mzansi Magic Twitter

This week's Our Perfect Wedding couple from Port Elizabeth impressed Twitter, until the bride's dressmaker revealed her wedding gown was "imported" from Durban, leaving tweeps confused.

Luxolo and Noluthando shared their story with the nation and let tweeps into their 'perfect wedding'.

Ever since the bride and her dressmaker revealed that the dress had been imported Twitter was expecting an international destination.

So when the dressmaker said it was imported from Durban, Twitter users lost their minds and a steady stream of memes followed.

After she said the dress is imported, expected to hear some European country's name. Kanti from Durban 😂 their faces 😂 #OurPerfectWedding pic.twitter.com/dyN9xq5Naz

Entlek South Africans are full of crap, A dress from Durban to PE is imported. #OurPerfectWedding pic.twitter.com/74DEukhBhh

#OurPerfectWedding s/o to the maid of honor for taking those keys out of the ignition pic.twitter.com/UpcxPIMu1d

Bakwethu she is importing her dress moss, all the way from KZN to Eastern Cape, it's interprovincial #opwmzansi pic.twitter.com/WMYhSfAhWv

Less than a week after hosting the BET International Awards ceremony, SA's Nomzamo Mbatha is set to light up another American stage.
TshisaLIVE
5 years ago

Cassper was 'furious' over the 'Papa Penny's son' reports

Rapper Cassper Nyovest has once again revisited his feelings over how the reports that claimed Papa Penny was his father affected him and his ...
TshisaLIVE
5 years ago

Everyone knows that Somizi runs his own race and does not conform to anything.  The Idols judge who has a 22-year-old daughter Bahumi also taught her ...
TshisaLIVE
5 years ago