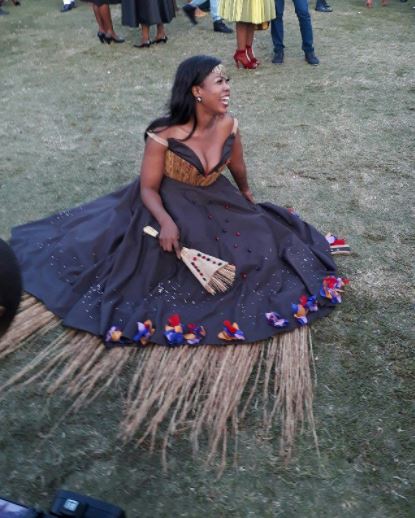 Entertainer Skolopad, still known to many as the 'lady in the yellow dress', debuted her new look at the Durban July this weekend but fans were not totally on board with the modified version.

Speaking to TshisaLIVE Skolopad said she loved her new look but knew it would receive mixed reactions.

"Every Durban July I wear long dresses because I always dress according to the theme. So for the Metros, SAMAs and feature awards I choose my own outfits that often reveal my body. I know now that people are concerned about what I wear, instead of what Skolopad is doing in the industry, but I want to change that," she said.

She previously told TshisaLIVE that she would move away from nudity as an attempt to re-introduce herself to Mzansi.

She hoped her new image as a musician would help refocus people's attention to her talent.

Fans on Twitter were split into opposing groups with some applauding her "covered up" look, while others missed her famous semi-nude looks.

Memes of Skolopad's outfit flooded Twitter and was even compared to a an "OPW bride's dress".

Why is there so much fabric covering skolopad's lower limbs... Who approved this?
Commission of inquiry is needed #TwitterCSI pic.twitter.com/pUAVrPs8U9

From disses to fighting over money: How Kanye & Jay Z fell out

Once the best of friends, US megastars Kanye West and Jay Z have reportedly fallen out over money.
TshisaLIVE
4 years ago

As the curtains were drawn on another season of Mzansi Magic's hit reality dating show, Date My Family, fans were introduced to perhaps the season's ...
TshisaLIVE
4 years ago