Our most touching interview with Ray Phiri 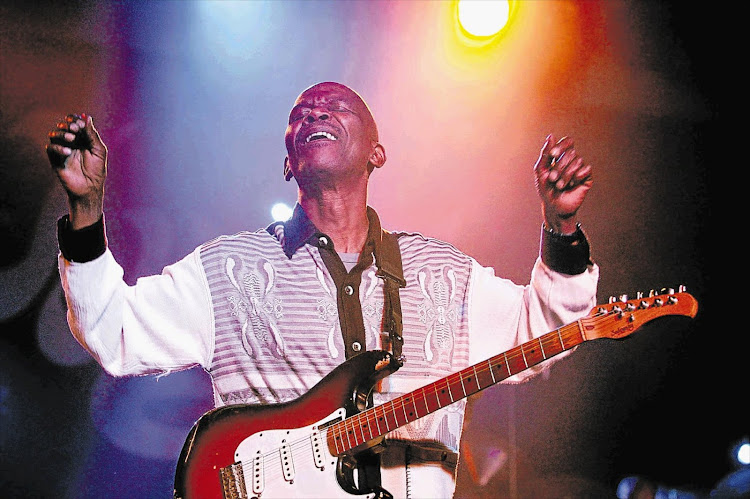 Six years ago former Sunday Times journalist Nikki Temkin sat down with veteran musician Ray Phiri, who opened about his rise to stardom, overcoming the pain of two failed marriages and being widowed in 2014.

The veteran jazz musician died at a Nelspruit hospital in the early hours of Wednesday morning after a battle with lung cancer. In the wake of his death there has been an outpouring of tributes from thousands of fans, friends and well-known personalities.

After three decades in the music industry Ray has left behind a lasting legacy through his music and the impact he had on people's lives.

Here's a snapshot of Ray's life in his own words...

Ray Phiri is a founding member of Stimela (meaning Steam Train). Between 1984 and 1989, the group had many hits, some of which were banned for touching an apartheid nerve. In the early 1990s, Phiri was invited by Paul Simon to collaborate on Graceland and Rhythm of the Saints and built a worldwide name for himself. Stimela recently won Remix of the Year, Best Adult Contemporary Album for A Lifetime and Best Traditional African Contemporary DVD for Live in Concert at the 2011 South African Music Awards.

I grew up near Nelspruit in a farming community called Crocodile Valley Citrus Estate. My father passed away when I was four years old. My mom remarried a Malawian guy who was a troubadour. He was a very good father. Everything I know with respect to culture, socialisation and the environment I learnt from him.

I was a sickly child but I was always surrounded by love. My mom is still alive - she's 105.

My father used to play me the guitar until he lost three fingers in a freak accident on the farm. He became bitter and never touched his guitar again. I stole it and taught myself to play.

I never wanted to let people remix Stimela songs, but times are changing. To mix old school and new school brings knowledge and energy together.

I've always been very curious and have a wide perspective of the world. I don't have tunnel vision.

Money cannot bring a family together. I want to learn to be a father and a friend and to succeed at this is my greatest wish.

I have become more resilient and stronger through my misfortunes. I'm a better person. I'm a learner. I used to be very antisocial, but not anymore.

When I was young, a group came from Alexandra and played in Nelspruit. I went on stage and danced like nobody's business. I made R35 because people were throwing coins at me. I decided to come to the big city and in 1967 I joined the Jabavu Queens as a dancer.

After my worldwide travels, I came back to Joburg in 1995 and I couldn't relate to the bustling negative energy around me. I was lonely in the concrete jungles of New York, Sydney, Paris and Joburg. I bought a little farm in Barberton, Mpumalanga, near where I was born, to exorcise my demons.

I formed Stimela in 1980. The three of us were childhood friends. We became musical pariahs because we were experimenting, but the music didn't sell. It was only when we were the opening act for Umoja that people started to embrace us.

After two failed marriages, I was widowed in 2004 when my third wife died in a car accident. We had 18 months of bliss and a seven-month-old baby. It almost destroyed me. My daughter, who is eight now, brought me back.

Cooking is my passion. My father taught me to cook with herbs and I find it very relaxing.

The Sama awards bring more responsibility to the band. We need to find new tricks of opening up and collaborating with the world.

It's the age of too much information and too little truth. Our education system is failing us. There are so many taboos. We talk in hushed tones.

South African music became more accepted through Graceland, my collaboration with Paul Simon. Graceland focused the world's attention on South Africa, giving us the impetus to fight against apartheid. My contribution brought a glint to people's eyes and they knew where the beautiful, haunting happy sounds came from.

There's bad blood with Paul Simon. He never gave me credit on the album for the songs I wrote, and financially we hardly got any royalties. But maybe I wouldn't have been able to handle all that wealth. I sleep at night, I have my sanity and I enjoy living. The big rock 'n' roll machine did not munch me.

South Africans need to be able to look at ourselves and laugh, play and eat together. We must celebrate our differences. I have no aspiration to be you. You complement me.

Ray Phiri's elderly mother has not yet been told about her son's death as family fear it could influence her health. Family spokesperson Paul ...
TshisaLIVE
4 years ago

An outpouring of tributes from around the country has flooded social media in the wake of veteran musician Ray Phiri's death on Wednesday ...
TshisaLIVE
4 years ago

Ray Phiri's last moments: 'He was surrounded by his family'

Ray Phiri's last moment were spent surrounded by close friends and family, his brother Paul Mkanyane has revealed to TshisaLIVE.
TshisaLIVE
4 years ago