Charlize Theron and Trevor Noah unite on The Daily Show 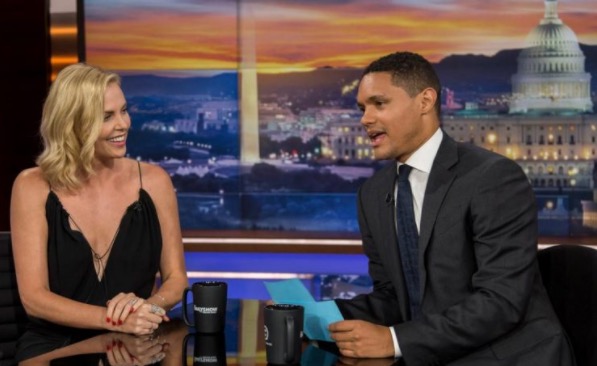 It was a nostalgic moment for fans back home to watch the internationally-renowned stars joke about being proudly South African.

Trevor kicked off their interview by expressing how proud he was when Charlize scooped an Academy Award for her role in Monster.

"I am not afraid to share this: When you won your Academy Award, I started crying and said, 'she is so good, she is so amazing, she is golden,'" Trevor said about Charlize.

Charlize said she was also super proud when Trevor took over the helm as host of The Daily Show.

Charlize was invited onto the talk show to promote her upcoming movie, Atomic Blonde in which she stars alongside James McAvoy.

The action-thriller sees Charlize play the role of an undercover MI6 agent during the Cold War who is on a mission to find her friend's killer. Lorraine finds herself in an even bigger conspiracy of double agents.

Charlize is a complete 'badass' in the movie, which has been dubbed the female 'James Bond'.

Charlize joked that South Africa made real 'badass' girls. "I feel like South African girls are just tough. Maybe there's something in the water right?," she said.

Trevor joked about it being cholera but quickly u-turned to set the record straight about Mzansi having some of the cleanest drinking water in the world.

Speaking to Entertainment Tonight Charlize said her mom saw the bruises she got while filming the movie, and was terrified.

“She saw some of the bruises and stuff, because she wasn’t around and she didn’t see a lot of what we were doing. When she watched the movie, I think she understood it a little bit more. But she definitely became protective," she said.