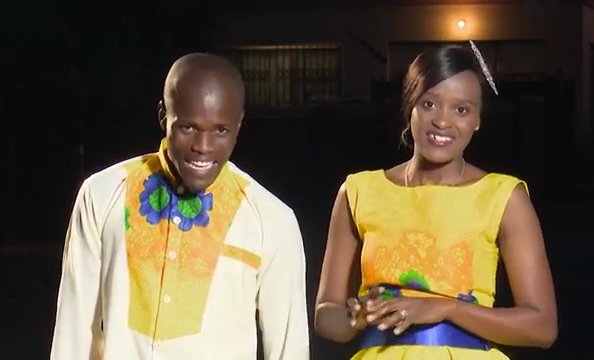 Boikanyo and Maria's wedding was their perfect wedding.
Image: Via Mzansi Magic Twitter

Twitter was taught a thing or two about having faith, as pastor Boikanyo shared that when he decided to get married, he had R18,00 in his account but continued to plan the wedding because he had faith.

When pastor Boikanyo met Maria he left with the feeling that he had met 'the one', now the pair have tied the knot with the whole nation watching on OPW.

Twitter was left wondering if the couple had their own 'special' vocabulary as their vows included phrases like 'you're my night lunch'.

Despite the confusing concepts that the pastor used to describe his love in his vows, Twitter was also confused how it was possible to only have 60 guests at their wedding, when you are a pastor and the location is a 'kasi' (township).

As per usual practice... the memes flowed in:

Guys, start planning your wedding with only R18.00 in your bank accounts because all things are possible thru God. FIRE! #OurPerfectWedding pic.twitter.com/hAVVC7160p

Today's groom was on his way to give prayer 🙏🏿 for others

and his prayers were answered♥️

The Pastor once had R18 in his bank account, moss R36 which is obviously double that can take me and my future to Dubai#OurPerfectWedding pic.twitter.com/l3F85vJlCj

Pretorians and weddings 👰 are like..!!! Maybe is time a consider moving to PTA #OurPerfectWedding #OPW pic.twitter.com/feBEL6gEWl

Me trying to count the number of guests at the wedding figuring out if it's still 60. Ko kasi shemmmm pic.twitter.com/8TA3DyW1hj

#OurPerfectWedding that R18 in your bank account is actually R180000, go get married, faith without actions is dead. Amen bazalwane pic.twitter.com/bh635dDj3j

He he I can't marry you, I don't have money . The pastor had R18. Stop with the excuses #OurPerfectWedding pic.twitter.com/yaqF0AX5jb