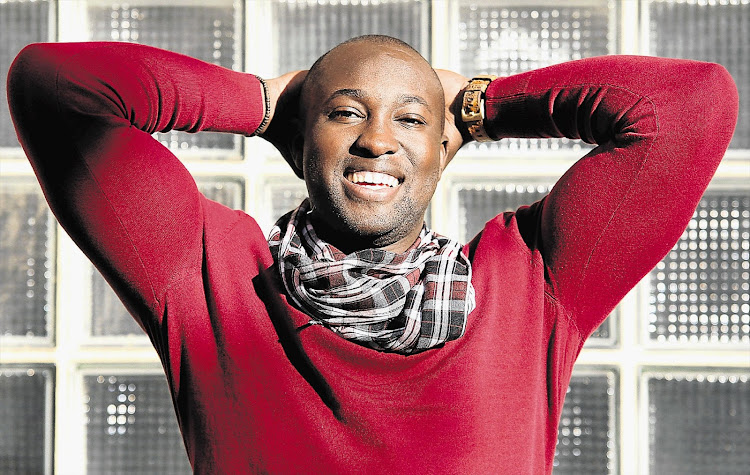 Simba Mhere wanted to get married by 30.
Image: Sunday Times

Simba Mhere's mother, Angela, still keeps a box of baby clothes that she wanted to give to her son to celebrate the arrival of his first child.

The Top Billing presenter had told her‚ before he was killed in a car crash‚ that he wanted to get married at the age of 30 and have children.

"He said to me‚ ‘Mama‚ the one I come home holding her hand‚ you must know she is the one’‚” said Angela at their home in Northgate, Johannesburg on Sunday afternoon.

Simba's dad, Joseph said the huge portrait of Simba was donated by a fellow church member who loved and adored his son hangs on the living room wall.

“I had kept a box of baby clothes. I was going to give them to his children. Every time‚ I went through the box‚ I would tell him that I would give the stuff to him. He would say‚ ‘but Mama these would be ancient by the time I have kids’.

“Now we are never going to have that. We are not going to be grannies to Simba’s children. It hurts me‚” said Angela.

Simba and his friend Kady-Shay O’Bryan‚ who was a passenger in the car he was driving‚ died at the scene of a collision on William Nicol Drive in Fourways‚ Johannesburg‚ on January 31‚ 2015.

Preshalin Naidoo is facing charges of culpable homicide and reckless and negligent driving in connection with the deaths of Simba and O’Bryan.

The case has been postponed several times. With each postponement‚ Simba’s family feel they are moving further and further away from finding closure.

“We are frustrated. The case is dragging on and on. What we’d like to see happen is justice. We need closure. We need healing‚ but we don’t seem to find it. Every time we go to court‚ we are reliving the whole experience‚” said Joseph.

Having to talk about Simba is a “difficult part” for his mother‚ who has fond memories of her son.

“I remember he was cooking one day and he said to me‚ ‘Mama I will never leave this house until I know you are all stable’.”

His parents described him as a happy person who was “full of life”.

“He was an extrovert. He was someone who would take charge in any situation‚ not in a bad way‚ but you could not miss him‚” said Joseph.

Simba would have turned 29 on October 29‚ and his  family and friends are planning to have a “big” celebration in his honour this year.

Every year on Simba's birthday the family gather at his grave. “We gather as a family. We talk about his short life with us. We try to see another day without him‚ which is not easy‚” said Joseph.

Simba’s father said that after his son died‚ he “lost appetite” for everything.

“I lost the desire to move on. You never expect to bury your child. Part of you is taken away. Even if I had 10 other sons‚ Simba would have been different. I don’t know of a day that passes without me thinking about him. Some days are more emotional," he said,

While the pain of losing their son will not easily go away‚ Simba’s parents say they draw strength from prayer‚ the church and the support they receive from people from all walks of life.

“The love we’ve received from South Africans from all walks of life is amazing. I don’t think he knew the kind of impact he made in the four years he was on Top Billing‚” said Joseph.

Just three days before she was set to celebrate her 52nd birthday, veteran actress Mary Makgatho died in a Pretoria hospital, never coming out of a ...
TshisaLIVE
5 years ago

After three years on Generations: The Legacy,  Thando Thabethe has confirmed that she has resigned from the SABC 1 soapie to explore other ...
TshisaLIVE
5 years ago

Popular DJ Euphonik had a "rollercoaster weekend straight out of a reality show" after helping a young muso go from a Twitter sensation to the ...
TshisaLIVE
5 years ago

Cici supported by her sister in court

Singer Cici was supported by her sister and publicist when she appeared in the Midrand Magistrates Court on Monday morning on charges of common ...
TshisaLIVE
5 years ago

'I've lost one of my best friends': Tributes pour in for Mary Makgatho

As news of Mary Makgatho's death spread on Monday, there was an outpouring of tributes from close friends and fans honouring her life.  Mary's ...
TshisaLIVE
5 years ago