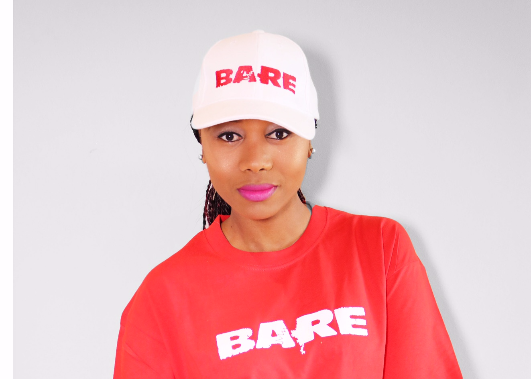 Author of controversial book Shattered Innocence, Jackie Phamotse is back with another book entitled Bare, which aims to create debate around the dangers of young women getting involved in toxic romantic relationships.

It seems that Shattered Innocence, which gave fictionalised accounts of sex, sugar daddies and politicians' "underground" lives, was only the beginning as Bare promises to go deeper in the life of a "blessee".

The book is dedicated to Karabo Mokoena and through it Jackie aims to breakdown what may have lead Karabo to stay in a toxic relationship.

Karabo's body was found burnt in  Lyndhurst on April 28. Sandile Mantsoe, her boyfriend, has been accused of murdering her and the court case is ongoing.

Bare highlights how one of her characters Treasure couldn’t resist money and the power her relationship brought and compares it to real-life situations where young women were killed after being in toxic relationships.

Speaking to TshisaLIVE, Jackie said she dedicated the book to Karabo because of her tragic story.

"You are nobody until someone kills you, then you become a story that others call history," she said.

The author said that despite being told not to include Karabo's name in her book by her uncle, she felt compelled to do so.

"This is not a book about Karabo alone, hers is just one of many. The difference is hers got publicity which is why more than honouring her this book mentions her name, because people already know who she is. So understanding why she may have stayed, may as well be an eye opener for someone in a toxic relationship," she said.

Jackie explained that her upcoming book would attempt to save young girls from being trapped by the luxurious "Instagram" lifestyles or at least explain some of the reasons they may find themselves there.

The young author said she hopes the book would guide parents on how to communicate with their millennial daughters.

She hoped it would also help parents to be more aware of when their daughters were falling into a trap to "keep up an image".

"This book is dedicated to beautiful women who lost their lives at the hands of their lovers or people that claimed to love them. It's for Karabo, for Reeva Steenkamp, Annelene Pillay and many whose names we don't even know. Through a character in the book, I try to explain why they may have stayed. Why they may have chosen a life designed for death everyday till they died," she said.

Jackie said that she is confident in the research she did before deciding to write the book.

She added that she was mindful that the book would open wounds for families whose daughters have been killed by their boyfriends, but believed that families need to learn about the struggles their daughters go through.

"Some families have no idea of how their kids are living in the urban cities or the pressure their kids have to survive. I want people to learn through my book that we need to break the generational curse of wanting the easy way out. We need to create our own truth, own dreams so that we create our own wealth and stop becoming targets for social psychopaths posing as lovers," she said.

Bare will be available online from Monday August 14 and will be in store August 15.

Our Perfect Wedding presenter Thembisa Mdoda was applauded for "having a good heart" by viewers for going out of her way to make sure Sunday night's ...
TshisaLIVE
4 years ago

Entertainer and socialite Zodwa Wabantu aims to encourage other women to step out of their comfort zones by embracing her flaws publicly.  Taking to ...
TshisaLIVE
4 years ago

Generations 'sex scenes' let off the hook by the BCCSA

The Broadcasting Complaints Commission of South Africa (BCCSA) has ruled that Generations: The Legacy was not guilty of breaching the broadcast Code ...
TshisaLIVE
4 years ago

After four years of staying away from performing in her hometown due to the pain and memories of having lost family members, musician Zonke Dikana is ...
TshisaLIVE
4 years ago

Robert Marawa, who is usually protective of his personal life, has revealed that he confirmed his split from Pearl Thusi to "own the space" and ...
TshisaLIVE
4 years ago