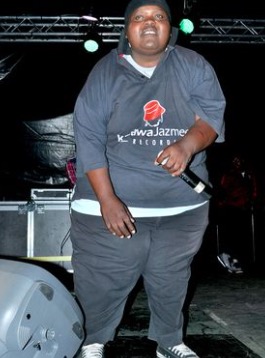 Only a small crowd attended Tsekeleke's memorial on Wednesday.
Image: Via Sunday World

Mourners at the memorial service of Dumi Masilela were rebuked by the leader of the SA Arts & Culture Youth Forum, Romeo Ramuada, for abandoning musician Tsekeleke, claiming the Rhythm City actor would not have wanted them to attend his memorial without also attending Tsekeleke's memorial.

The two stars died within days of each other and were both honoured at memorial services on Wednesday in Johannesburg's East Rand.

"I am disappointed to be here. I don't think that Dumi would have wanted South African celebrities to only come and honour him and forget about Tsekeleke. There was another memorial service for Tsekeleke and we didn't see any of you attending that service," said Romeo.

"You must be very ashamed of yourselves, South African celebrities, because that is not the spirit Dumi fought for," he said, pointing to a group of TV actors and actresses who had come together to mourn at the memorial.

He was booed and jeered at by a number of mourners at the packed service but his words vocalised the frustrations of many who attended Tsekeleke's memorial in Tembisa just three hours earlier.

That memorial was attended by a much smaller crowd that did not even fill the community hall where the service was held. Speaking to TshisaLIVE, a frustrated Eugene Mthethwa claimed the industry had buried Tsekeleke long before his death.

"The industry killed and buried Tsekeleke before he died but his music will live on," the veteran kwaito artist said at the memorial.

Pastor Mboro also criticised celebrities and said that only two celebrities had come to mourn at the memorial.

"Let them (celebrities) support one another. They are all jealous about one another. They compete amongst themselves. It is only them who can solve this. Today you are up, tomorrow you are down. You are not coming to a memorial because that person was no longer 'that'," said Mboro.