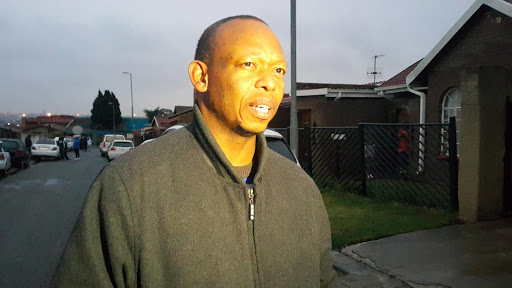 Eugene Mthethwa said that Tsekeleke was buried by the industry long before his death.
Image: Kyle Zeeman

Kwaito veteran Eugene Mthethwa has expressed disappointment and sadness over the way Tsekeleke was "forgotten and silenced" by the industry and the nation.

On Wednesday afternoon those close to Tsekeleke gathered at the Rabasotho Community Centre to honour the late kwaito star, who died last week after a battle with diabetes.

Speaking to TshisaLIVE outside the hall, Eugene said that the industry had failed the late kwaito star.

"For me to say the industry will miss Tsekeleke will be wrong because as you can see and hear, not much is being said about Tsekeleke, it is about Dumi. The industry and the nation had silenced, had buried Tsekeleke long before his death," Eugene said.

The kwaito veteran added that people didn't play his music and that he was sitting at home with no work.

"People didn't play his music, he was sitting at home with no work so no one will really miss him because they had already forgotten about Tsekeleke, it is only now that he has died that people are talking about him again and have started to remember that he existed at some point, which is very sad," he said.

Eugene said he believed that as artists they also failed each other because they didn't care about each other.

Pastor Mboro echoed Eugene's sentiments and told TshisaLIVE that celebrities needed to support each other more.

Tsekeleke will be laid to rest on Saturday after a private funeral service.

Mourners at the memorial of Tumi Masilela were rebuked by the leader of the SA Arts and Culture youth forum Romeo Ramuada for abandoning musician ...
TshisaLIVE
4 years ago