'I don't want him to grow up like a coconut,' says Kenny Kunene's wife 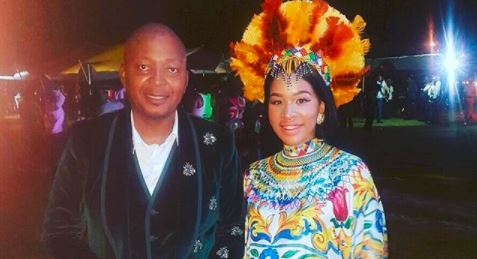 Businessman Kenny Kunene and his wife say they want their son to be a respectful and humble person
Image: Via Instagram

Kenny Kunene's wife and baby billionaire's mother Nonkululeko insists that she wants her son to grow up as a modest and God-fearing child despite all the money his father spends on him.

Speaking to Drum Nonkululeko said she wants her child to visit their childhood homes often so that he learns to appreciate what he has.

"I want him to know those dusty streets we grew up on and to see the suffering of those who aren't as blessed as he is. I want him to appreciate what he has. I don't want him to grow up like a coconut but to be respectful and humble," she said.

The wealthy businessman's son was born in May and has already had a lot of money spent on him. His father proudly splurges on his clothes and accessories such as Remo's R80,000 pram.

Speaking to TshisaLIVE Kenny has previously expressed his views on "spoiling" his son after a few people raised their opinions on his "excessive splurging".

Kenny said his poverty stricken background has always inspired him to want to do better by his own children. He said now that he can afford to spoil his children, he will not hold back.

"I had my children at different stages of my life. There are things that I wish I could give my other children, however I gave them the best I could afford at the time. Best is relative, and now I am better financially and therefore Remo has what he has," Kenny said at the time.

Baby Remo has an Instagram page which is filled with pictures of him rocking designer labels such as Gucci and Versace.

Don't ever say Trevor Noah doesn't keep up with what is going on in SA!
TshisaLIVE
3 years ago

Samantha Cowen determined to swim the Straits of Gibraltar

Former radio personality and author Samantha Cowen's longterm dream of swimming through the Straits of Gibraltar could soon become a reality after ...
TshisaLIVE
3 years ago

Director of film Jagveld, Byron Davis, has expressed immense pride at the recognition the flick has received in Massachusetts, USA at 2017 Woods Hole ...
TshisaLIVE
3 years ago

A week after young rapper Junior De Rocka lost his phone, thugs have leaked perhaps the year's biggest local collab- a remix the artist did with Riky ...
TshisaLIVE
3 years ago
Next Article