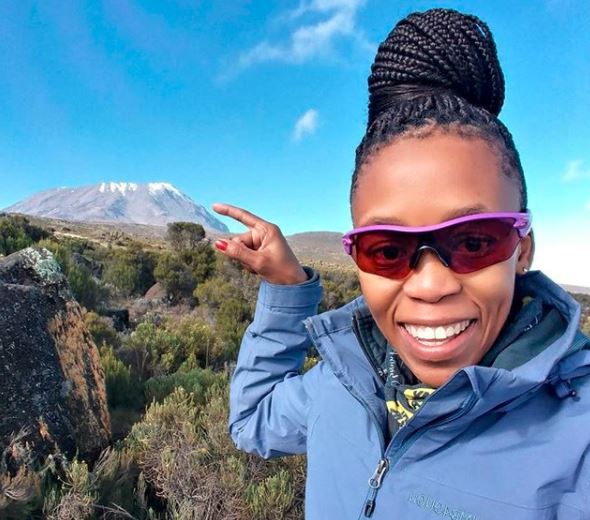 Adventure mommy Letshego Zulu has spoken about the importance of keeping your promises and raising her adventure baby
Image: Via Instagram

Having just summited Mount Kilimanjaro last month, Letshego Zulu, talks about her 'new' challenges which include raising a happy and adventurous child. She also has also spoken out about why it was so important for her to keep her promise to her late husband Gugu Zulu.

Sitting down with the panel of Trending SA, Letshego opened up about having to be strong for herself and her two-year-old baby Lelethu. She added that she is finding her way and that she has had to talk herself through the last year without her husband.

"I get my strength from my little girl. She's the reason I wake up everyday. She's going through the 'terrific twos'. I talk to myself through everything. I plan her outfits in advance, like now in the morning when we are getting ready for pre-school and she doesn't want to change from her PJs. So now I bath her the night before and put on her "school" clothes which have now become her sleeping clothes, for now. You have to work around the 'terrific twos'," she said.

Letshego emphasised the importance of keeping her promise to her late husband Gugu, by summiting Kilimanjaro and how it needed to happen.

"I gave my word to my husband. So many people tried to disarm me. I had emails coming in with people are saying 'no, don't go' or 'it is too dangerous'. They told me to go back in a couple of years, but I couldn't. I had to go because I gave my word," she said.

Letshego's late husband, Gugu , died after complications from altitude sickness while on a Trek4Mandela expedition up Kilimanjaro to raise funds for sanitary pads to help keep girls in school.

Watch the rest of the episode here:

A week after young rapper Junior De Rocka lost his phone, thugs have leaked perhaps the year's biggest local collab- a remix the artist did with Riky ...
TshisaLIVE
3 years ago

Kwaito veteran Eugene Mthethwa has expressed disappointment and sadness over the way Tsekeleke was "forgotten and silenced" by the industry and the ...
TshisaLIVE
3 years ago

Mourners at the memorial of Tumi Masilela were rebuked by the leader of the SA Arts and Culture youth forum Romeo Ramuada for abandoning musician ...
TshisaLIVE
3 years ago

Almost a year since Brangelina announced that they had officially split, international reports claim that divorce proceedings have slowed ...
TshisaLIVE
3 years ago
Next Article