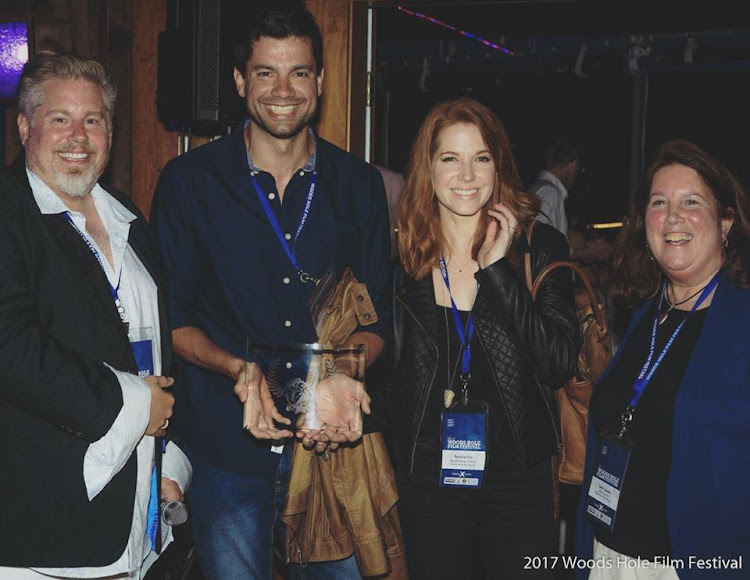 Some of the cast members of Jagveld posing with the Best dramatic feature award which they won at the 2017 Woods Hole Film Festival
Image: Via Jagveld Twitter

Director of film Jagveld, Byron Davis has expressed immense pride at the recognition the flick has received in Massachusetts, USA at the 2017 Woods Hole Film Festival after it was rewarded with the Best Dramatic Feature award.

Speaking to TshisaLIVE Byron said that although he wasn't there to receive the award he was happy to be part of an authentic South African story that was being recognised globally.

"It's genuinely a great story and for members of the global film community to say 'hey we see you and we are enjoying your stories' means a lot to me and the whole cast and crew. It means that slowly, the world is opening up to the diversity of stories we have the capacity to tell. That we can have authentically South African action films and many other types of stories that can attract a global audience," he said.

Byron explained that a lot of effort had been poured into making Jagveld and gave praise to writer Deon Meyer and the cast who he said were incredible.

"We shot on location and that in itself pushed all of us to stay true to our way of story telling. From the unique elements of that place to the actors' emotions in the film is truly amazing. That is why it is such an honour for other people to see what we have done and help us celebrate our stories," he said.

The Afrikaans film tells the story a young woman who is in the right place at the wrong time. Emma le Roux (played by Leandie du Randt) witnesses the murder of a policeman at the hands of members of a drug syndicate and unfortunately they see her and begin to hunt her down. The young lady is not as vulnerable as she seems and instead of being easy prey, the hunters find themselves under threat of being hunted.

Mourners at the memorial of Tumi Masilela were rebuked by the leader of the SA Arts and Culture youth forum Romeo Ramuada for abandoning musician ...
TshisaLIVE
4 years ago

Almost a year since Brangelina announced that they had officially split, international reports claim that divorce proceedings have slowed ...
TshisaLIVE
4 years ago

Actress Enhle Mbali Maphumulo has revisited the "pain, abuse and racial slurs " she experienced because of her interracial relationship on 7de Laan.
TshisaLIVE
4 years ago