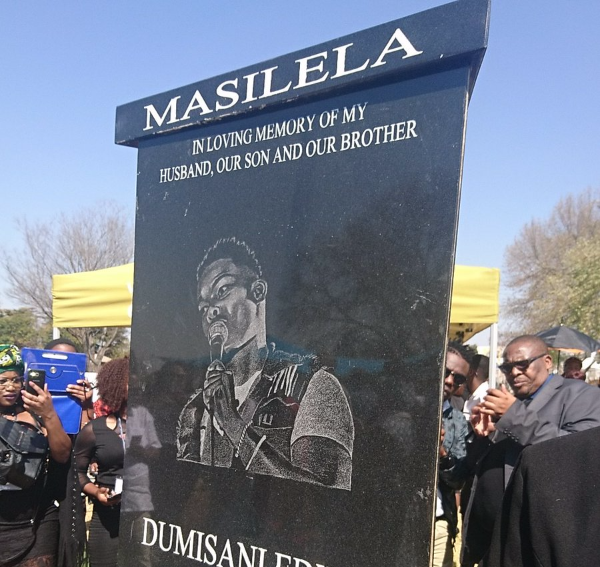 One side of Dumi Masilela's rotating tombstone
Image: Via Twitter

Late Rhythm City actor Dumi Masilela was laid to rest this past Saturday and popular tombstone makers Bataung Memorials have explained the inspiration behind the 3-ton, rotating tombstone that cost R160k.

Speaking to TshisaLIVE the company’s CEO Lebohang Khitsane said that his team wanted to come up with a concept that would capture the multi-talented star's personality.

"We wanted to capture who Dumi was to his family, his friends and his fans across different platforms. So the stone was inspired by his multi-talented nature. He was an actor, singer and soccer player, of course in addition to his other life roles like being a husband, son and brother," he said.

The family says Dumi's tombstone is in three parts, to symbolize the triple threat he was. Rest in eternal peace Dumi #DumiMasilelafuneral pic.twitter.com/eIsfXn49Bn

The tombstone, which weighs over three tons had to be delivered by a truck and was assembled using a crane.

The headstone rotates so one can see the different talents of the late actor. Lebohang added that they had carved a stone camera, which would face the rotating headstone.

He said the camera symbolised the way Dumi "shared his talents with the world through the camera lense".

"We work hard to capture the essence of the people whose tombstones we create. Dumi was an amazing young man, so his stone had to have meaning and be amazing," he said.

Dumi was shot and killed on August 2 during a botched hijacking in Tembisa.

Officials have confirmed to TshisaLIVE that a man is being held in police custody for allegedly being involved in the murder of Dumi Masilela, as ...
TshisaLIVE
3 years ago

Senzo Meyiwa's widow, Mandisa Mkhize who herself has felt the pain of losing a husband, had some words of encouragement for Simphiwe Ngema.  Taking ...
TshisaLIVE
3 years ago

Those close to Dumi Masilela struggled to fight back tears as he was laid to rest at Zuurfontein Cemetery on Saturday afternoon.
TshisaLIVE
3 years ago

Dumi Masilela's widow and actress Simphiwe Ngema was overcome with emotion and struggled to say her final goodbye to her husband.
TshisaLIVE
3 years ago

Dumi Masilela's widow and actress, Simphiwe Ngema's took to the stage to pay emotional tribute to her husband.  After singing a worship song in his ...
TshisaLIVE
3 years ago