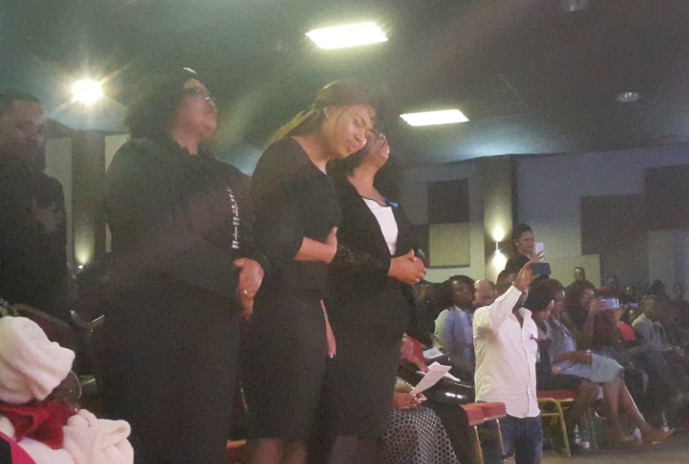 Actress Simphiwe Ngema has broken her social media silence since the death of her husband, Dumi Masilela to make a heartfelt birthday wish to hear him give her encouragement in her grief.

It's been nearly four weeks since the Rhythm City actor was shot in a botched hijacking. Simz was with him in the hours after his shooting and before he eventually died of his injuries.

Simphiwe celebrated her birthday on Tuesday and took to Instagram to post a screenshot of a message that Dumi wrote two years ago about overcoming trials. In the caption she opened up about her grief and her wish to hear him speak to her.

"All I want for my birthday is to hear you say I'm gold because I am burning!," she wrote.

Fans and friends, including actress Ntando Duma, poured onto Simphiwe's page to send her messages of encouragement and strength.

The pair celebrated their traditional wedding two months ago. Speaking about her loss at the memorial for her husband, Simphiwe said that nothing could have prepared her her for being a widow at the age of 27.

"Nothing prepares you for one day to be a 27-year-old widow. That all the dreams you've dreamt of will be taken away from you," she told mourners.

Dumi, who played the role of Sifiso Ngema on Rhythm City, had been visiting a friend in Tembisa on August 3. He had parked his car in a road when a black Jeep approached them. They tried to flee but the Jeep gave chase and the occupants opened fire.

Thembisa Mdoda opens up about bae: I found love on Our Perfect Wedding

Thembisa Mdoda has previously admitted that she has someone special in her life, but has refused to give much more detail. At the Mzansi Viewers' ...
TshisaLIVE
3 years ago

AKA has shown his haters that he's winning this life thing, adding a BMW i8 to his growing car collection now worth over R2.6-million.
TshisaLIVE
3 years ago

Somizi let out his inner Diana Ross this past weekend when he hosted the red carpet for MTV Base Africa at the MTV Video Music Awards in LA on Sunday.
TshisaLIVE
3 years ago

Rapper Cassper Nyovest is facing the grim possibility of having to finance his R15 million Fill Up FNB Stadium concert on December 2 entirely out of ...
TshisaLIVE
3 years ago

I see myself in her, says Skolopad about Kelly Khumalo

Despite having been hospitalised last week for a nervous breakdown, Skolopad made her way from the Free State to Johannesburg for Kelly Khumalo's one ...
TshisaLIVE
3 years ago

Sunday World is reporting that Somizi's legal team has sent Bonang a letter instructing her to remove his name from her book. Somizi's spokesperson ...
TshisaLIVE
3 years ago
Next Article