IN MEMES: Here's what South Africans would have done with R14-million 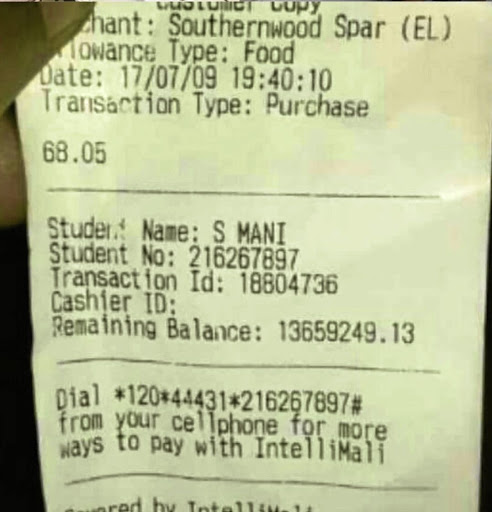 In true Mzansi style, Twitter has been on fire with memes and comments over the R14-million Walter Sisulu University fiasco, and has got users thinking how they would spend the money if it "magically" appeared in their accounts.

The university has been making headlines across the country over the past two days after it emerged that R14-million was deposited into student, Sibongile Mani's account by National Student Financial Aid Scheme (NSFAS) about five months ago.

"She also bought an iPhone 7 for herself and all her friends. She suddenly appeared at lectures wearing designer clothes. She threw surprise birthday parties for her friends and used some of the money to fly to events like the Durban July," he said.

As the fiasco unfolds there's been a steady stream of memes that have flooded the social media platform.

If #NSFAS accidentally deposited that 14 million into my account

My first reaction would be:👏👏👏😂😂😂 : pic.twitter.com/wLkymbZobR

Wow to think I just need 1mili to fix my life 😦😦 #NSFAS pic.twitter.com/kfYGYTUoZ1

Be honest, if that #NSFAS money was deposited by accident into your account what would you have done? Report it or spend it fast? pic.twitter.com/azEYitDSSp

Me if I become a #Nsfas Millionaire pic.twitter.com/Vkj4rhlCcQ

If I was the one who got that R14 million ...I'd be moving to Zimbali tomorrow morning #NSFAS pic.twitter.com/hepMcYK3bk

#R14m paid to a student and no one noticed this for 5 months #NSFAS pic.twitter.com/qqKB05R224

IN MEMES: Twitter grabs the popcorn as Diski Divas go to war

Fans of popular Mzansi Magic reality show Diski Divas were glued to their screens on Wednesday evening after the feud between divas Kia Ntshole and ...
TshisaLIVE
3 years ago

Veteran actress Rosie Motene, popularly known for her character Tshego Motene of Generations fame, has been mostly out of the spotlight and told ...
TshisaLIVE
3 years ago

Ayanda Thabethe opens up about 'amicable split' with her ex

Top Billing presenter Ayanda Thabethe has opened up about her split from her ex-husband and explained that she was in a space where she had to answer ...
TshisaLIVE
3 years ago

Just weeks before she celebrates her white wedding, Minnie Dlamini is jetting off to France with her bridesmaids for a massive bachelorette ...
TshisaLIVE
3 years ago

Actor Andile Nebulane's Igazi character has scored him both admiration and  "strange looks" from his fans who have come to know him as Jonga the "man ...
TshisaLIVE
3 years ago
Next Article