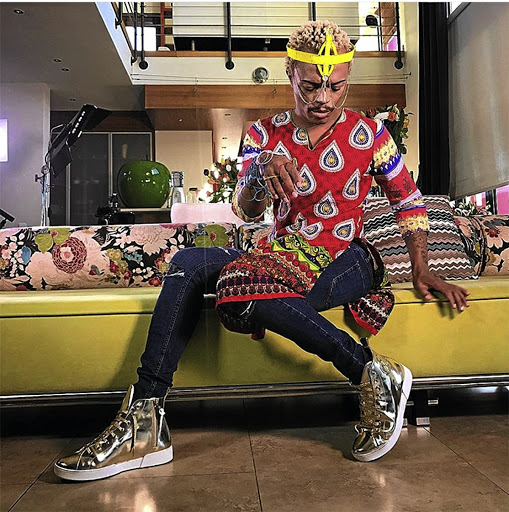 Fresh from his recent trip to America to host the red carpet for MTV Base Africa at the MTV Video Music Awards in LA, Somizi has revealed that after experiencing the Hollywood life he would rather chase the "African dream".

Speaking on his Metro FM breakfast radio show with DJ Fresh this week, Somizi said he had experienced the Hollywood life and was underwhelmed by it.

"I got to be inside it (Hollywood) and I look at it and I was like 'America clap your hands because you sold us a dream'. It is not what it seems," Somizi said.

He explained that he got to be in the same room as US music icons Nicki Minaj and Kendrick Lamar but was seemingly unimpressed, saying that they  "sold a dream" to their followers.

After the underwhelming experience, Somizi said he was more determined to abandon any pursuits of an American dream and rather "make it" back on home soil.

"I want to be one of the people who really emphasises the importance of being proudly African, of not chasing the American dream. Don't chase it. You don't realise how much we have. We are okay with just being in Africa and killing the African dream. My trip reminded me of that," Somizi said.

Somizi won over American audiences with his unique fashion sense and outgoing personality, hitting the red carpet at the awards in a crystal-encrusted outfit worth over R40,000.

Speaking to TshisaLIVE, the designer of the outfit said that the outfit was inspired by Somizi's "loud personality".

"Somizi has a loud personality and I wanted to channel that in the outfit. 90 percent of the outfit was made with tiny Swarovski crystals, including in the shoulders and the leg boot pants," designer Anita Ferreira said.

Khanya Mkangisa gets into gear for next Tropika Island of Treasure

Actress Khanya Mkangisa is the first celebrity to be announced as a contestant for season eight of reality show Tropika Island of Treasure, which ...
TshisaLIVE
4 years ago

Lady Zamar has lambasted claims that she faked her way through a live performance on reality singing competition,  Idols SA on Sunday night, accusing ...
TshisaLIVE
4 years ago

ANCYL Treasurer and Mabala Noise boss Reggie Nkabinde and his childhood sweetheart, Beauty Matela tied the knot over the weekend.
TshisaLIVE
4 years ago