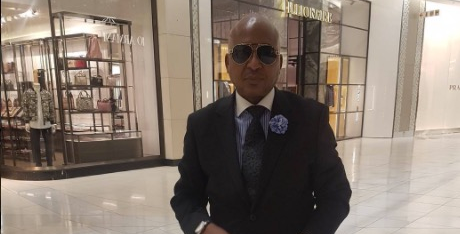 While Kenny Kunene is lucky to have escaped unharmed after the BMW 125i he was driving was riddled with bullets on Tuesday night, he couldn't escape the fierce reaction from social media users, who expressed suspicion over the incident.

Kenny told TimesLIVE that at least "five rows of bullets" had been shot into the BMW he was driving.

He said he had earlier met with Sunday Independent editor Steve Motale and was advised by Steve's bodyguard that the friends not travel together.

Kenny gave media interviews shortly after the incident detailing the shooting. In these, he insisted the shooting was a "hit" and said the attackers were "baying for our blood."

While many were shocked by the shooting, it didn't take long for Twitter users to flood the social media site with memes questioning how Kenny escaped unharmed and accused the businessman of being "an attention seeker".

This is how "Kenny Kunene" escaped the shooting pic.twitter.com/mbPH6nm7gB

"I missed you more than bullets aimed at Kenny Kunene" would be a nice pickup line pic.twitter.com/LYaWC6h2yR

The Chinese 21 bullets that missed Kenny Kunene and his friend😂😂😂 pic.twitter.com/rgs9bOgmyv

It's been revealed : Kenny Kunene is 'THE ONE' pic.twitter.com/o8jF6nFWJR

How you gonna shoot someone 21 times and miss all of the shots ? What are you, a blind hitman ?? #KennyKunene pic.twitter.com/P3dr03l8CY

So Kenny Kunene and Steve Motale alerted ANN7 before calling the police? pic.twitter.com/ix3vtaUV77

#KennyKunene : "I've been shot at by a hit man.."
SA: pic.twitter.com/8QgpegSxek

Someone please tell Babes Wodumo to send me the link so that I can delete Kenny Kunene please pic.twitter.com/laWirvFrrA

Even though Papa Penny Penny's son, Bafana Mdluli' was completely stripped off all his possessions and was disrespected when thugs left human faeces ...
TshisaLIVE
4 years ago