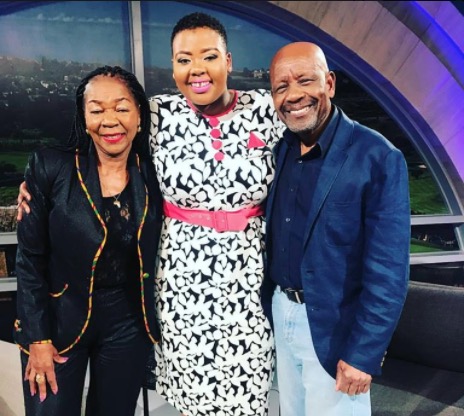 Anele Mdoda interviewed Letta Mbulu and Caiphus Semenya about their love and years of experience in the music industry.
Image: Via Facebook

Legendary musicians Caiphus Semenya and Letta Mbulu, who recently celebrated their 50th wedding anniversary have shared the secret behind their lasting marriage, and longevity in the industry.

Speaking to host Anele Mdoda on Real Talk with Anele, the couple revealed the qualities they love about each other. Having met in 1959, the pair have been together for 52 years and Caiphus said it was "love and being" that kept them together.

"All in all, that's why we've been together for the past 52 years. We really get along fine and we understand each other. We support and love each other and we are in each other's corner," Caiphus said.

Letta said that Caiphus was a loving person, whom despite having a short temper, is a "lovely person when you get to know him".

Caiphus said when they were younger, he would always tell her to take charge and be in control. He praised Letta for standing her ground during disagreements between them especially music related.

"I want a strong woman, I don't want a weakling of a woman. What will I do with that? Because if I were to die my kids would be in trouble with a weak woman. So I love her strength, and she is very strong. She is also very stubborn but she is also sweet when it comes to our thing. We know how to settle our problems," he explained.

Between the two of them, Letta and Caiphus have released more than 20 albums and revealed that they would soon be opening a music school called National Academy Of Africa's Performing Art.

No matter how broke he is, Tumi Molekane won't ditch the cigars

Rapper Tumi Molekane, also known as Stogie T, has experienced the highs of getting big money and the feeling of losing almost all of it, but no ...
TshisaLIVE
4 years ago