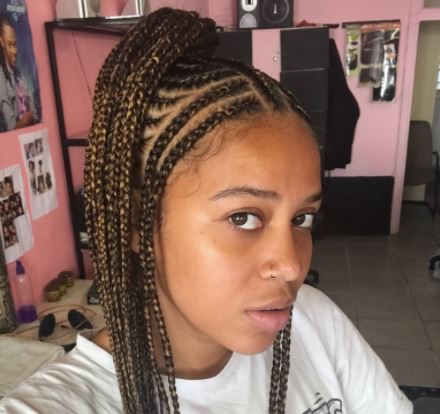 Rapper Sho Madjozi is excited by the reception from South Africans of her Tsonga raps
Image: Via Twitter

Xitsonga rapper and actress Sho Madjozi has rapidly become the new kid in the entertainment industry and has credited her parents for instilling the love she has for her Tsonga culture through their exemplary lives in her.

Despite being a white man, Madjozi's father spoke fluent Tsonga and was "a real village man" back in Limpopo where she grew up.

The rapper, whose real name is Maya Wegerif, explained to TshisaLIVE that her deep love for her culture was inspired by her parents and community.

"My father met my mother when he was laying low during the apartheid era. I was raised by people that loved who they are and I spoke Xitsonga from the first time I could speak. My dad lived in the village and was a true village man. He spoke Tsonga and for me he was Tsonga. He even joined stokvels and everything. He was (and still is) truly invested in the culture," Madjozi explained.

The actress explained that it was the "most natural" option to express herself in Xitsonga because she was raised by exemplary parents where cultural identity is concerned. The rapper is also a talented poet, writer and actress.

Madjozi said she loves that the industry has embraced her for who she is. The rapper burst onto the music scene, after she collaborated with Okmalumkoolkat's on his hit track,  Gqi and has since dropped iDumi hi phone, where she raps in Tsonga.

"Tsonga is a language I've been speaking all my life, so it was the most natural thing for me to express myself in the language. I didn't think [my expressions] would turn into a career, especially not as a rapper. I didn't think I had the right look. The way I saw it, a female rapper had to be sexy like Nicki [Minaj] or hardcore or gangster-like. I was none of the above. But people have just accepted me, for just saying I'm Tsonga and I'll use my language," she said.

The rapper, who is also a published poet, said her parents made her read a lot as a child. She said she received books for "almost every birthday" and that ignited her love for literature and creative writing.

Actress Nondumiso Tembe, who has spent most of her life in America still has deep roots in South Africa and is passionate about making sure her ...
TshisaLIVE
4 years ago

iNumber Number fans can't get enough of actor Israel Matseke's tsotsitaal and have launched a social media campaign to get him to write an official ...
TshisaLIVE
4 years ago