'There's no mention of Euphonik's name in the book' - Bonang's camp 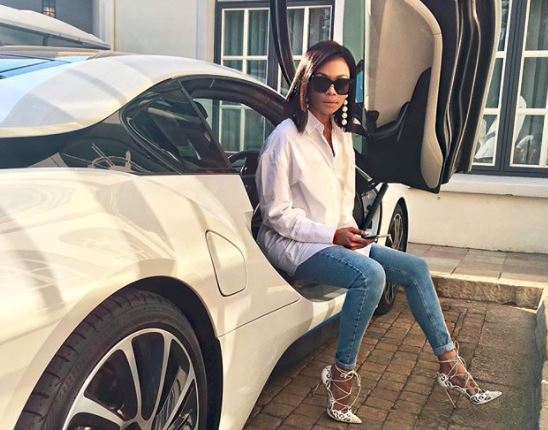 Bonang Matheba's team maintains Euphonik's name is not mentioned in her memoir.
Image: Via Instagram

Despite recent reports which claimed Euphonik was successful in his fight to "keep his name out" of Bonang Matheba's book, both Jacana Media and Bonang's camp have maintained that there was no mention of his name in the book.

Bonang's brand manager Sylvester Chauke told TshisaLIVE that he would not comment on Euphonik's name being removed from the book because it was never mentioned in the original book.

"If you've read the book, you will agree that the name Euphonik is not mentioned anywhere in Bonang's book. So we can't comment on his name being removed because it was never there. Anything else is alleged and I can't comment on alleged things," he said.

This comes after Sunday Sun reported that Euphonik successfully "saved his brand from being dragged in the mud" by Bonang's book, Bonang: From A to B.

The report claimed that Euphonik apparently succeeded in removing a chapter, which alludes to him being "abusive" to Bonang from the new version of her book.

However, a Jacana Media  representative told TshisaLIVE the publisher could only confirm that factual and grammatical changes were made to the book.

It has also been revealed that a reprinted version of Bonang: From A to B would be available next week.

"As far as I know there's no mention of Euphonik's name. Changes have been made to Bonang's book as as planned. We can't go into much detail but can reveal that the book will be out next week, only then can comparisons be made to the initial book," Jacana Media said.

Bonang's book was recalled from book stores last month after it got major public backlash for grammatical and factual errors. It also emerged that Euphonik and her former bestie, Somizi Mhlongo turned to their lawyers to have their names removed from the book.

Entertainer Skolopad was left "disappointed" after she was asked to eat her breakfast outside due to her "inappropriate" outfit at a well-known hotel ...
TshisaLIVE
4 years ago

SABC 1's Tjovitjo continued its dominance as the most-watched drama series in the country, beating out Mzansi Magic's hit show Is'thunzi and iNumber ...
TshisaLIVE
4 years ago

After 20 years of waiting and planning, kwaito veteran Mandla "Spikiri" Mofokeng and his lady finally celebrated their white wedding this past ...
TshisaLIVE
4 years ago

Zodwa Wabantu claims that "politics behind closed doors" was the reason her performance at a private club in Zimbabwe over the weekend was canned at ...
TshisaLIVE
4 years ago

Xolani Gwala off air due to a 'serious medical challenge'

It has been announced that popular 702 personality Xolani Gwala will be off air for several weeks to allow him space to deal with a "serious medical ...
TshisaLIVE
4 years ago