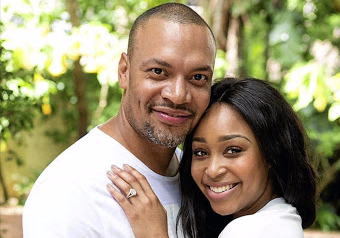 Minnie Dlamini and Quinton Jones tied the knot this past weekend.

Nandi Madida was not at Minnie Dlamini and Quinton Jones' white wedding over the weekend but she definitely played a role in their fairytale love story.

As the couple tied the knot in an all-white ceremony in Cape Town on Saturday, Nandi took to social media to reveal that the couple first met as teenagers at her family home.

"(I am) heartbroken I can't make it to your big day Minnie but what makes me feel better is knowing that you two met for the first time at our family home when you were still in your teens," Nandi said.

She said that their love story was a tale she would tell their kids and grandkids.

The couple's white wedding was attended by some of the biggest names in Mzansi, including Somizi Mhlongo, Unathi Msengana, Jessica Nkosi and Anele Mdoda.

Minnie, who promised a dress out of the ordinary, dazzled in a long white dress with a veil, while Quinton wore a dashing black suit.

Take a look at some of the snaps from the big day.

US comedian and film star Kevin Hart faced the wrath of social media this past weekend after posting a video on social media where he appeared to ...
TshisaLIVE
4 years ago

After a few weeks of "dealing" with Our Perfect Wedding grooms who left a lot to be desired, Twitter was finally glad to find a groom who showed ...
TshisaLIVE
4 years ago