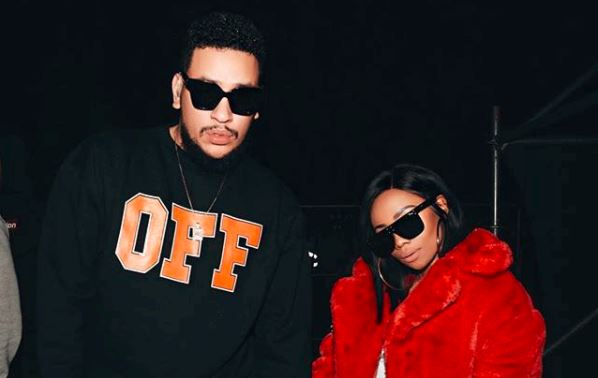 Rapper AKA and presenter Bonang Matheba have mastered the art of shutting out negativity.
Image: Via Blaq Smith on Bonang Matheba's Instagram

Bonang Matheba has revealed her strategy to deal with being 'dragged' on Twitter is mastering the skill of "ignoring" trolls every day.

Queen B recently became the talk of the town after a Sunday tabloid reported  that her beau, rapper AKA,  is allegedly cheating on her.

Despite the commentary that surrounded her romance, queen B kept mum on the issue, but when a tweep implied that she would be dragged, she made it clear that she was used to it by now.

....they do it everyday. We ignore them everyday. 😌 https://t.co/9aimdjrENR

A Sunday tabloid reported that Bonang's bae was spotted with a popular socialite at the recent screening of Floyd Mayweather's fight with Conor McGregor at a restaurant in Sandton.

The report claimed that the socialite even posed for pictures outside AKA's car.

However, speaking to TshisaLIVE AKA dismissed the reports and set the record straight on the current state of his relationship with Bonang.

"I don't usually comment on my personal life but it is ridiculous. Me and Bonang are happy. It would have been believable if we were not or if we had problems. But we are in a good space and have never been stronger. It won't change our relationship because we don't listen to what people say," said AKA.

Thembisa Mdoda helps to find the next OPW host

As Our Perfect Wedding fans come to terms with Thembisa Mdoda's departure from the hit reality show, she has been hard at work behind the scenes ...
TshisaLIVE
4 years ago

Comedian Trevor Noah attempted to settle the "beef" between tennis player Maria Sharapova and her US rival Serena Williams, sitting down with the ...
TshisaLIVE
4 years ago

Serving major heat and being unapologetically comfortable in their skin runs in Skolopad's family.
TshisaLIVE
4 years ago