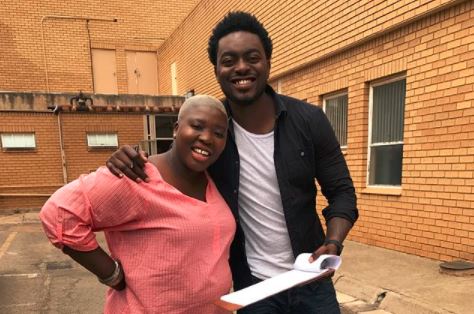 After a successful one woman comedy show, Black Tax, comedian and actress Celeste Ntuli has started shooting for upcoming local flick, Looking For Love, in which she plays the leading lady.

Speaking to TshisaLIVE the actress said viewers can expect tons of fun from the film.

"The film is called Looking for Love and it is my first lead role and I'm so excited. It's a romantic comedy and we are trying to go for everything that hasn't been done before," she said.

Celeste said being on set has been amazing and she was happy she got a chance to contribute to the creative process. She said there was a great balance of different types of humour in the film, which features four comedians.

The actress explained that she hoped that her young and vibrant character would not only cement her name as an actress, but would also help people see she's "an actress with range".

"I play a young woman called Buyi Dube, she's in her late 30s and single. A typical workaholic. She's Zulu, moved to Joburg for work and is under a lot of pressure to find love. People will find it easy to relate to her. People around her are getting married and everyone keeps asking when she will do the same. She goes through crazy things to find the kind of love others describe," she said.

A-reece talks about being 'independent' in love & music

After leaving Ambitiouz Entertainment following a contractual dispute earlier this year, there was speculation that would curb the A-reece's ...
TshisaLIVE
4 years ago

DJ Mahoota has rubbished suggestions that he was "not interested" in working with other members of the popular group Trompies ahead of their reunion, ...
TshisaLIVE
4 years ago