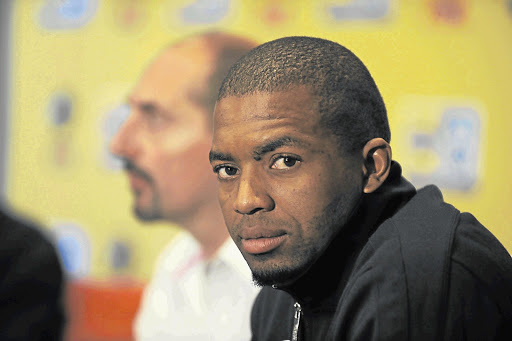 Twitter is proud of Itumeleng Khune for "accepting that Minnie is officially gone".
Image: GALLO IMAGES

Twitter has decided that Itumeleng Khune's recent 'winning streak' on the field is because he's finally made peace that ex-girlfriend, Minnie Dlamini is a taken woman. This after the Kaizer Chiefs goal keeper walked away with the man of the match trophy three times in a row.

Itumeleng and Minnie were once one Mzansi's 'it couples' before they split in 2014, which left many of their fans disappointed.

Minnie has since married the love of her life Quinton Jones and Twitter believes that this has something to do with Khune's amazing game.

With a truckload of memes, Twitter users went on to share how happy they are that Minnie's wedding had a great effect on Itumeleng and went on to warn "celebrity girls" to stay away from Khune.

They don't want anyone to mess with the "success spell" that Minnie's wedding has left on Itu and in turn Kaizer Chiefs:

I think Khune has accepted that Minnie is gone forever!! He's playing like a man with no stress!!🤔 #AbsaPrem #SSDiski pic.twitter.com/GvulHQlY1M

There Only Two Goalkeepers In This Country , Itumeleng Khune & Others ! pic.twitter.com/194jXwsmuc

To all the ladys in RSA stay away from Itumeleng Khune...we at Chiefs like him like this. pic.twitter.com/NIHoXXN1Ol

letting go of a toxic relationship can help you be more focused n be a better person. Look at #Khune now pic.twitter.com/TiHLpo1CSX

So Minnie got married last weekend and Khune got his third Man of the Match consecutively in less than 10 days. What next? #AbsaPrem pic.twitter.com/B0i2gwV5gC

Itumeleng khune is the best goalkeeper in the world🙌👏👏 pic.twitter.com/oP2JrBT2pu

@MinnieDlamini your marriage is good for our team...Khune's performance is tops. Wise move minnie! Please keep this one.😂😂😂 pic.twitter.com/pvKKVnqF5a

We Kaizer Chiefs fans at the moment We Hope & Pray Itumeleng Khune doesn't find a Girlfriend till the Season End!! 🙏 pic.twitter.com/OsNx0NMlGW

Can Minnie Dlamini get married every week for the sake of all Kaizer Chiefs? Being Mrs Jones has ignited something in Khune's performance! pic.twitter.com/tnOsHC9ay5

Khune one of the best In the world pic.twitter.com/WPZ7hYQWJj

Itu Khune gets another man of the match... More like Man of Country.... Wena Mr Jones u can keep Minnie... Re sharp ka ene pic.twitter.com/BurHx4pM1m

But someone thinks Zodwa has something to do with Khune's flourishment!

Ever since Itumeleng Khune took a photo with Zodwa Wabantu, he has won Man of the Match in every game. @KaizerChiefs Amakhosi ajabulile pic.twitter.com/Xd6uaYq9be

Traditional artist Esther Mahlangu is "excited and honoured" to have her bold Ndebele artwork brighten up the streets of New York in the form of a ...
TshisaLIVE
4 years ago

After a successful one woman comedy show, Black Tax, comedian and actress Celeste Ntuli has started shooting for upcoming local flick, Looking For ...
TshisaLIVE
4 years ago