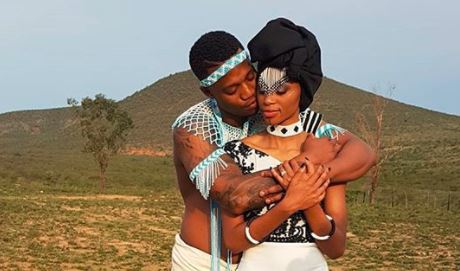 Singer Thabsie and her husband Thando Vokwana
Image: Via Instagram/Jewel_weddings

Singer Thabsie celebrated her union with husband Thando Vokwana this past weekend in a luxurious traditional affair with over 100 close friends and family.

In a chat with TshisaLIVE, the singer who burst onto the scene with smooth vocals on Kwesta's hit song Ngiyazifela Ngawe gushed at finally having those close to her witness her union to the "love of her life".

"Traditionally, I have been his wife for a while, it's just that we held off on the celebration for some time. It feels amazing. Everything about it (the day) was perfect. The weather was perfect and I got to sing for the love of my life. I sang Ngiyazifela Ngawe and that was a special moment for me, singing for my husband," she said.

The singer said the couple decided to have a destination wedding to keep the authenticity of the traditional theme, and merge her 'teenage' dreams of a wedding with her Zulu culture and his (the groom's) Xhosa culture.

"We wanted to honour where we come from, so even though we could have had the wedding in Jo'burg we took it home. I am so excited for everything that is coming our way... having the wedding celebration has made our union all the more special," she said.

Thabsie confirmed to TshisaLIVE that her wedding was a "definitely not" a publicity stunt.

"No, it was a real wedding. I would never do that to people. Besides, I have already released my music video for my single African Queen and it's doing well. My debut album, titled Songs About You was also recently released, just before my wedding," she said.

Take a look at some of the snaps from the big day:

There are very few weddings (if any) where a bride literally dances to her own song. @thabsie_sa getting down to her hit single African Queen. #TTUnion #NationsAwait #WeddingPlanner4AllSeasons #TheStandardInWeddingPlanning #TwedsT #BrideTribe @voks_85 Check out our full profile by following link in bio.

Thembisa Mdoda has reflected on her struggles in the industry, which include being judged for her weight and criticised for getting divorced.
TshisaLIVE
4 years ago

Dr Precious Moloi-Motsepe flew the South African flag high when she was honoured with the inaugural Franca Sozzani Award at the United Nations in New ...
TshisaLIVE
4 years ago

Stepping into the life of legendary yet troubled boxer, Ezekiel 'King Kong' Dlamini, 60 years after iconic musical King Kong made its debut has been ...
TshisaLIVE
4 years ago

A year after tying the knot to his longtime beau Gugu in a traditional ceremony, Tira said that he is "loving" married life and reflected on how it ...
TshisaLIVE
4 years ago