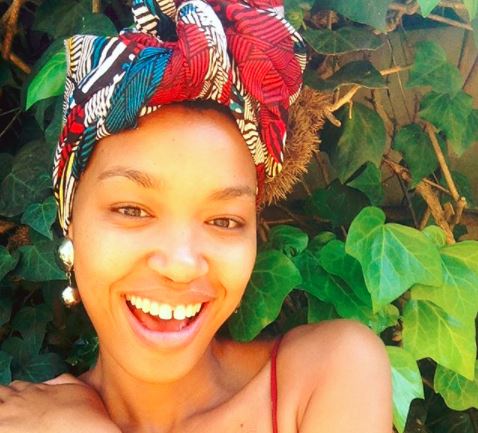 Berita's performance was cut short by a man wielding a machete.
Image: Via Instagram

Singer Berita is grateful to have escaped unharmed, after an unknown man armed with a machete stormed onto stage towards her at the Kwanokuthula Stadium in Plettenberg Bay.

The Thandolwethu hitmaker was only two songs into her set when a man believed to be deranged ran onto stage and started cutting the sound cables, before he ran towards her.

Speaking to TshisaLIVE Berita's manager, Ninel Musson, who was with her at the time said they were not physically harmed, and that the singer was getting back into her daily routine.

"Berita is doing fine. We landed safely in Johannesburg yesterday. It was obviously a traumatic experience but she was more disappointed that she could not complete her set, as people came from across the country to see her perform. She had a moment, after the whole commotion where she wanted to go back on stage but was advised not to," said Ninel.

Ninel said Berita was not letting the incident slow her down and was already preparing for her upcoming performances.

She explained that it was a scary experience and that the man looked "seemingly deranged".

"It was one of the scariest incidents I have experienced at a show. I was with Berita and we are both grateful to have escaped alive and unharmed. We regret that Berita was unable to complete her set as the crowd in attendance were extremely excited to see her perform and many travelled from far to witness the African Jewel live,” she said.

Ninel explained that the matter was reported to the police, but as far as they knew the man was still at large and no arrests were made.

Actress Rami Chuene put a tweep back in his lane on Sunday, after she gave "straight people" advice on how to interact with homosexuals, but was ...
TshisaLIVE
4 years ago

Chill! AKA doesn't have a contract clause about performing in the rain

AKA's team have denied that the rapper has a clause in his contract preventing him from performing in the rain. This after the musician failed to ...
TshisaLIVE
4 years ago

As competition on popular reality show Idols SA heated up on Sunday, fans of the show took to Twitter to suggest that producers may as well call it a ...
TshisaLIVE
4 years ago