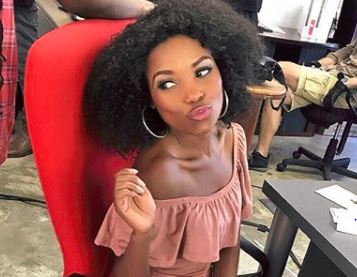 Actress Thandy Matlaila has no problem with flirting.
Image: Via Instagram

Actress Thandy Matlaila's character on The Queen is a notorious flirt and the actress has explained her stance on flirting, saying she has no problem with admiring "God's work".

Thandy's care-free character, Cleo flirts with every man she meets, and the actress told the Fresh Breakfast team that she too has no problem with flirting in reality.

"As Thandy, I've always had one rule in every relationship. That, just because you are on a diet doesn't mean you cannot read the menu. I feel like it keeps things going and keeps them fresh," she said.

The actress explained that her character is relatable because she draws inspiration from her own life.

She admitted that Cleo flirts a lot but her husband is certain that she is truly just looking with no intention to touch.

Socialite Pulane Lenkoe was left fearing for her life on Monday evening after witnessing a heist in Johannesburg that she described as the scariest ...
TshisaLIVE
3 years ago

Rapper AKA is convinced that there are evil forces out to destroy his reputation, after an image emerged on social media showing 'drugs' on his table ...
TshisaLIVE
3 years ago

Minnie Dlamini and Bonang Matheba have often competed for the title of Mzansi's biggest star, but despite the temptation Minnie says she has never ...
TshisaLIVE
3 years ago

IN MEMES: Twitter applauds Isithunzi for dealing with real issues

Twitter could not believe that the riveting story of four young girls on Isithunzi came to an end on Monday evening, however they were grateful for ...
TshisaLIVE
3 years ago

Afrikaans pop star Bobby van Jaarsveld will be away from the mic for six-weeks after he undergoes throat surgery on Wednesday, his manager Ronel ...
TshisaLIVE
3 years ago
Next Article