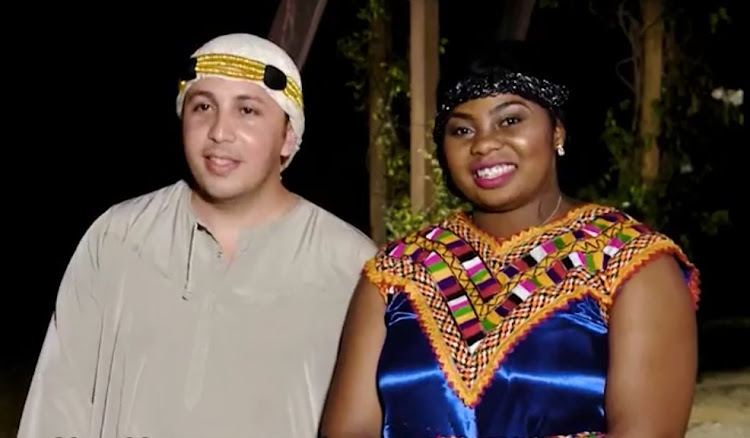 OPW couple Thando and Mohammed are besotted with each other despite the challenges.
Image: Via Mzansi Magic Twitter

Although there were a couple of awkward moments due to the language barrier that left the groom confused, Twitter still celebrated the union of Our Perfect Wedding's Thando and Mohammed as a symbol of how beautiful interracial weddings are.

Thando and Mohammed met on a flight back from France, in November 2014 when she was nursing a broken heart from her previous marriage.

Thando, who is Zulu, admitted that she would change her religion among other things to accommodate her Muslim husband, Mohammed.

Although there were a few concerned viewers over the "rights of the bride" and the compromises she admitted to making, Twitter was impressed by the wedding.

However, they couldn't help but wonder how long the marriage would last considering Mohammed could hardly understand English, never mind the Zulu language.

#ourperfectwedding How is this going to work? He doesn't understand Zulu & English, they just don't click. pic.twitter.com/A6TE9m9IlL

Am I the only one that feels bad that they keep speaking Zulu, and he doesn't understand #OurPerfectWedding pic.twitter.com/zEd6Q41VNr

Am I the only one that feels bad that they keep speaking Zulu, and he doesn't understand #OurPerfectWedding pic.twitter.com/C3MFmLnyCD

This couple met in a plane and the groom proposed in Zanzibar serious levels #OurPerfectWedding #opwmzansi pic.twitter.com/WnAUMFiS91

This guy makes me wanna cross over to the side of the land owners, but the thought of speaking English everyday!#OurPerfectWedding pic.twitter.com/DG7Wiaexqf

This thing of Dib not touching other women, I like it. It kinda reduces chances of infedility, I hope. #OurPerfectWedding pic.twitter.com/FhC0QCxiYH

When they make jokes in isizulu and Mohamed is lyk #OurPerfectWedding pic.twitter.com/HQt9FyPvCb

Award-winning UK band Bastille performed for thousands of local fans this past weekend, a thrill for lead singer Dan Smith only matched by the chance ...
TshisaLIVE
4 years ago

Zodwa Wabantu visited TshisaLIVE and spoke to us about her life.
TshisaLIVE
4 years ago

Let's get on thing straight: Khanyi Mbau is proud of her new light skin. She's got no issues about being darker before. And she speaks about it... ...
TshisaLIVE
4 years ago

Unathi Msengana on Saturday confirmed during a TV interview on eNCA that she and her husband Thomas are not together. The couple, who are notoriously ...
TshisaLIVE
4 years ago

"Growing up people always told me I would be nothing. I know what I am here for. I knew I had 'something' but I didn't think it would be this ...
TshisaLIVE
4 years ago