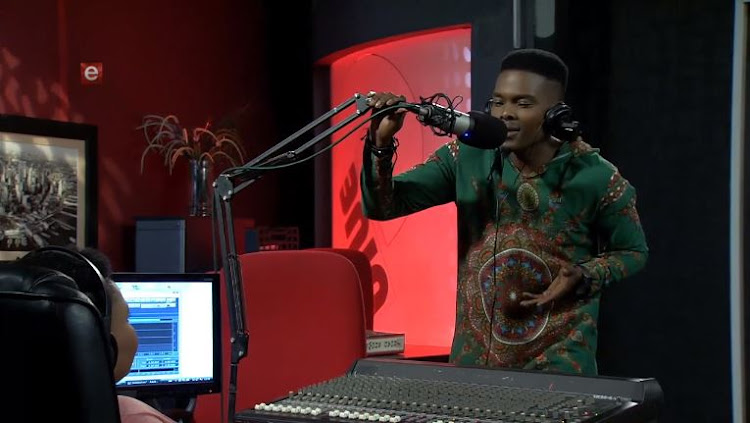 Two months after being killed in a botched hijacking, actor Dumi Masilela made his final appearance on e.tv's Rhythm City on Wednesday night.

Fans had to wait until the last few minutes of the show to finally see Dumi, who played the role of Sfiso Ngema on screens. In the final scene of the episode, Dumi's character walked into a studio to record the song Ungasabi, which he wrote for the series just before his death.

Skip to the 17:45 minute mark in the video below to see the scene.

The show's producers revealed last month that Sfiso's exit would mirror Dumi's murder, which happened in August during an attempted hijacking. Although a reenactment of the hijacking would not be shown, it would be reported by one of the characters.

Rhythm City  confirmed to TshisaLIVE that after Dumi's last scene the show's characters would have time to deal with Sfiso's death before a special on-screen memorial service in his honour on October 18. The memorial will feature appearances by the actor's mom Sabatha Magdeline and brother Thabani.

Reacting to Dumi's final TV appearance, the star's widow Simphiwe Ngema said the scene made the shock of his death final. She also referred to Dumi as her eternal crush.

There was also a flurry of emotional tributes and messages from Dumi's friends and co-workers.

I think of you and pray for your heart all the time. And tonight I'll be thinking of you and @dmasilela during Rhythm City. Love & Light. Peace that surpasses all understanding 🙏 💕💕💕 📷: @lerato_zah

Dumi died in hospital after being shot during an attempted hijacking in Tembisa on August 2.

Trap musician Yung Swiss says that the relationship between himself and Emtee has deteriorated so much, there is little chance of the pair working ...
TshisaLIVE
4 years ago

Skolopad on Zodwa beef: She's like a trailer and I am a car

Singer and dancer Nonhlanhla "Skolopad" Qwabe is ready to take her beef with Zodwa Wabantu to the next level and has promised more fireworks between ...
TshisaLIVE
4 years ago

Dumi Masilela killed by hijackers who 'knew him, car'

Rhythm City actor Dumi Masilela was no stranger to the men who shot him dead in an attempted hijacking in Tembisa two months ago. This startling ...
TshisaLIVE
4 years ago

As Simz Ngema now faces the mammoth task of attempting to carry on with her normal life after the death of her husband Dumi Masilela, she has slowly ...
TshisaLIVE
4 years ago

It's been one and a half months since actor Dumi Masilela was gunned down in a botched robbery, but the pain of his death will remain in the hearts ...
TshisaLIVE
4 years ago