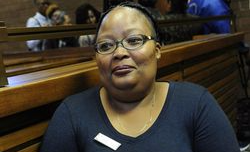 Translator Sizakele Mhlongo was the talk of social media for her work during the Brickz sentencing proceedings.
Image: Veli Nhlapo

Court translator Sizakele Mhlongo stole the show at the sentencing of musician Sipho "Brickz" Ndlovu but she says she was just doing her job.

Sizakele found herself trending on social media after her animated and diligent translations grabbed the attention of those watching to learn Brickz'S fate in the Roodepoort Magistrates Court.

Speaking to Sowetan, Sizakele said that she was simply showing the passion she had for her work.

"I am very passionate about my job. I love it because I come across a lot of different cases and learn a great deal from them. I love what I do and that's what I wake up for in the morning."

Sizakele, who can translate into several languages, was called on to translate court proceedings into Zulu and said that case was a difficult and painful one to work on.

"This has been a very painful and difficult case to work on - not only for me but (for) everyone involved in it. The most difficult part was having to translate for the complainant (Ndlovu's niece)".

Meanwhile, social media users responded to her work during the court proceedings with hilarious messages and memes.

#brickz can't wait to hear the sentencing by the #interpreter pic.twitter.com/XftlP5moVI

That translator is winning this day...
Bereka Mosadi vibes on level 100!
#brickz pic.twitter.com/xWopWNUnAO

'He trusted me with his brand’ - Zodwa sings Tira's praises

Zodwa Wabantu has described meeting DJ Tira as one of the blessings in life and has thanked him for trusting her with his brand.   The entertainer ...
TshisaLIVE
4 years ago

Actor Tumisho Masha is headed to court next month on charges of assault, which have been reinstated by his estranged wife Zozibini Mtongana, almost a ...
TshisaLIVE
4 years ago

Ahead of an on-screen memorial service to be held for Dumi Masilela on Rhythm City on Wednesday evening(18 October), the late actors close friend ...
TshisaLIVE
4 years ago

Comedian and Rhythm City actor Robby Collins is carving out his own career in the entertainment industry but has apparently often been mistaken for ...
TshisaLIVE
4 years ago