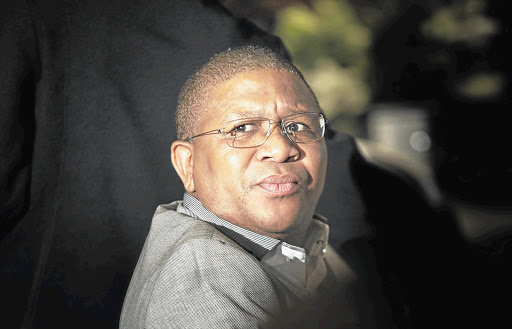 Fikile Mbalula questioned if Migos was a type of fruit.
Image: LEBOHANG MASHILOANE

Twitter is convinced that the only American celebrity known to Police Minister Fikile Mbalula is Beyoncé, after he shared his confusion over American rap group, Migos and why they were trending.

Migos' performance at the Ticketpro Dome in Johannesburg last weekend got tongues wagging after the concert started three hours late, and there was only one opening act which angered thousands of concert goers.

As a result of the drama that surrounded the group's concert, they have been trending on Twitter for more than 48 hours.

Fikile, who is usually on top of his game with international acts and Twitter trends,  had no idea who Migos was and Twitter was ready to get him up to speed.

Here are some of the hilarious answers in memes:

Only one of them is a fruit if I'm not mistaken, it's Guava, Offsex & Takeaway. pic.twitter.com/TEz9wOoMcQ

Do u know Azania and her Daughter???
Ask them,they will give u all the details about that "Migos" pic.twitter.com/Wnb0SDDeRc

You know them well Uncle Migos. You dab to their songs everytime they call you to pause with criminals via #WanyaTsotsi pic.twitter.com/k9BVVToPNh

They the 1 that managed 2 get away with a heist at Ticketpro Dome.Robbed every1 out of their 700 accomplice Mabala Noise.... pic.twitter.com/o4hxjYD40i