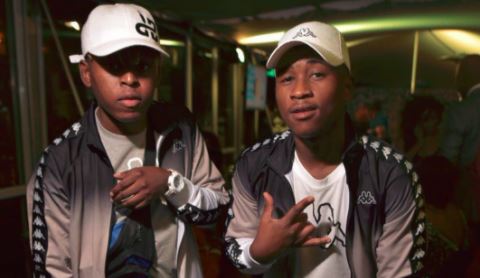 Distruction Boyz have taken to Twitter to drop some gqom education on their haters.
Image: Via Instagram

After almost shutting down the internet on Friday with the release of their debut album Gqom Is The Future, Distruction Boyz have taken time out from the praise to address criticism over the "poor quality" of their album cover.

Taking to social media the group said that before people criticised, they needed to do their research about gqom music, and what it stood for.

"People must learn to understand the real culture of things. Don’t just open your mouth without researching and having an understanding," they tweeted.

The group said they produced gqom music because they understand the finer details about the genre and about the people who listen to the music.

"If you look closer, gqom artworks are usually low quality and most are very funny. The dress code is also a bit odd and even the venues look shandy," they tweeted.

The duo said that people must not hate what they don't understand. "Our sleeve represents our Gqom culture to the core."

Speaking to TshisaLIVE on Monday, the young musicians said they were shocked by the overwhelming response their album  received.

"We were blown away with response to the album but it was really what we expected. It all went according to plan," the group's Thobane 'Que' Mgobozi said.

The pair has set an ambitious goal to become the first act to reach gold certification for a gqom album.

Read the rest of their comments here:

We produce Gqom because we understand what Gqom means, what it stands for, what makes the sound what it is, who consumes it and why

iGqom is a very dark and hypnotic sound. It’s derived from raw and hard hitting House elements. It’s for people who love dancing.

If u look closer Gqom artworks are usually low quality n most are very funny. The dress code is also a bit odd n even the venues look shandy

But that is what Gqom is about. It’s for the carefree. So dont hate what u dont understand. Our sleeve represents our Gqom culture 2 da core

We are clued about our work. Which is why many JHB labels have tried to sign us but we’ve rejected them. Bcoz we want to inspire the kids

Dont get excited n go around signing every contract. Learn n know what u’r doing first. We r 21 n 22 years but we’re doing it on our own