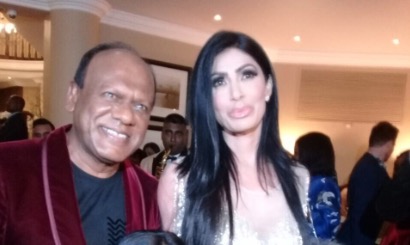 Outside the swanky Beverly Hills Hotel in Umhlanga, Durban sits a sexy black Aston Martin DB11, just begging to be ogled. Everyone is whispering around her, daring the twin-turbo v12 engine to give a thunderous roar.

You see, it's the new Aston Martin and this is the very first one to touch SA soil. And it was given to actress Sorisha Naidoo by her businessman husband, Vivian Reddy, as a gift for her 40th. The price tag? Ag, just around R4.8-million. With no extras, mind you.

It's been a festive (and expensive) week for Sorisha as she glided around Mauritius at the 5-star Trou aux Biches Beachcomber Golf Resort & Spa with friends and family for the first leg her of birthday celebrations. That was a more intimate celebration though and one cannot turn 40 without a big bash which must have expensive champagne, violinists sushi a plenty and a celebrity or two.

Bassie and Zanele Mbokazi are also in the house #sorisha40 pic.twitter.com/kt4jkwWAig

Sorisha, who has often hogged headlines because of her controversial skin lighting, has been using the hashtag #40neverlookedthisgood to celebrate the milestone. She said that looking after herself mentally and physically is a priority.

"I feel 20. I feel like it's just starting. I drink lots of jasmine and white tea. I'm a vegetarian and I don't drink or smoke. Mentally, you have to think you are young. You have to love everyone and you cannot gossip or hate on people."

Dressed in a sheer gold number, Sorisha said that hubby Viv, who is friends with President Jacob Zuma and admitted in 2012 that he had helped fund the first phase of Zuma's Nkandla homestead, bought her a limited edition Louis Vuitton bag, the only one of its kind in the country. (Yeah, guaped)

"I got the most beautiful LV bag. It's a limited-edition. There's only one in the country, so if I see anyone else carrying it, I'm going to be very upset. But it was the trip to Mauritius that was priceless because I got to be with the most important people in my life," she told TshisaLIVE.

It was Viv, dressed in a maroon velvet evening jacket, that confirmed the extortionate beast outside was also a gift courtesy of him.

"My wife Sorisha is one of the most amazing human beings you will ever get. She gets up at 4:30 in the morning to make sure the kids are seen to and the dogs are fed. She gets on with the prayer. She is so spiritual in life and it's such spirituality that spreads to our kids and myself."

He said he decided to spoil her because she spoils everyone else with her goodness on a daily basis.

"She's the kind of person who makes everyone feel special. So that is why I made sure that on her birthday she felt special. I bought her something absolutely unique, the first one in the country, the Aston Martin DB11 v12."

In 2013 Vivian famously spent R10-million on his extravagant birthday bash, which included a R1-million cake. While certainly costly, Sorisha's 40th was definitely a more toned-down affair. There were food stations dotted across the venue - Indian, Middle Eastern and sushi were the most popular options -and it was her simple cake that really caught our attention, reminding us of the girl who used to work the till at her parent's Shallcross shop, won Miss India South Africa, went on to work graveyard shifts at East Coast Radio and bagged a gig on soapie Scandal!, throwing her fully into the blaring limelight.

With her parents, children and husband she cut her yellow and pink two-tier cake. It was decorated with paw prints and right on top, a symbol of her real fur friends back home, was a plump pug.

"Thank you for being here. For spending the night with me."

Sorisha Naidoo, surrounded by family, as she cuts her cake. #sorisha40 pic.twitter.com/wVQqtm4nHg