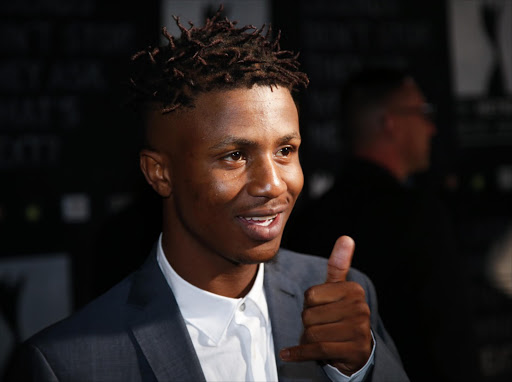 Emtee has apologised to fans for leaked video of his manhood.
Image: Rogan Ward

Rapper Emtee, who has become the talk of the town over leaked pictures of his manhood, has described the debacle as a "big mistake".

Screenshots from a video, which was shared by Emtee on Instagram live, went viral on Monday morning, with thousands of followers poking fun at the situation.

The Roll Up hitmaker told TshisaLIVE that he was very sorry and that it was a big mistake.

"I was in the toilet and answering fans' questions on Instagram live. I needed to pee but without thinking I used the same hand I was holding my phone while I was doing my thing and used the same hand to flush. I didn’t even think about it until I realised what I had done and I immediately apologised. I was like 'oh, no!,'" he said.

Emtee said he deleted the video as soon as he realised what happened because he didn't do it on purpose. The rapper said he was aware of the comments being made about him on Twitter but couldn't do much else except wait for the storm to subside.

"I have seen the reaction and I am not sure what I can do about it or how to justify it. I am aware of what they are saying about me. I am sorry and there’s not much else I can do. I am a soldier so I will weather this storm and just see what happens."

Twitter was sent into a complete meltdown on Monday morning, after screenshots of what is believed to be Emtee's manhood went viral.
TshisaLIVE
4 years ago

These snaps of Sbahle in a white number is flames

It's no secret that Sbahle Mpisane aka fitnessbunnie works incredibly hard at making sure her body is always in good shape.
TshisaLIVE
4 years ago

Bonnie Mbuli puts 'pervert' on blast for sexting her

TV presenter and actress Bonnie Mbuli has lambasted a follower for sending her  inappropriate sexual advances on social media. The star revealed on ...
TshisaLIVE
4 years ago

Riky Ricky schooled his social media haters this past weekend after they dragged the rapper over his latest EP, claiming that he was robbing them by ...
TshisaLIVE
4 years ago