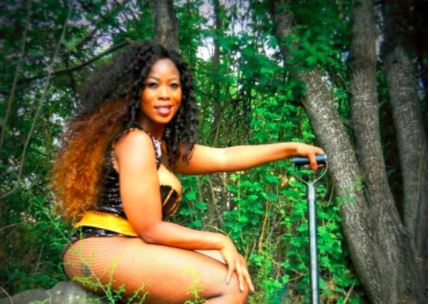 Skolopad is willing to reinvent herself if it will benefit her music career.
Image: Via Instagram

Skolopad is set to launch a social media campaign to help make a decision of whether she should change up her image and leave nudity in 2017. This after the entertainer found her name among the hilarious Twitter trend, #101ThingsToBeLeftIn2017.

She told TshisaLIVE that she was willing to consider changing things up only if she received enough retweets during her campaign.

Skolopad said that she thought about the campaign after she got hundreds of complimentary comments when she shared pictures of herself in a more covered up look.

"People saw pictures of me in normal clothes the other day and went crazy but they forget that I always said I am three in one. Nonhlanhla and Skolopad are different. But I now have a great team of people trying out new things with me and if I get a couple of thousands retweets when I ask if I should leave "nudity" in 2017, then I might think about it."

Skolopad said instead of being upset that some people suggested she should remain in 2017, she wants to use the opportunity to accelerate her success.

She said although she won't compromise her identity, she was willing to make the right adjustment if her social media campaign proved that the majority of her fans thought she needed it.

"I love who I have become to some women. A symbol of a free woman who embraces her body, but at the same time all great artists reinvent themselves when there's a need and I've been having fun with different look. The need for my career to thrive as an entertainer and musician, means I will try anything as long as there's enough support to do so."

Skolopad is determined to prove to haters that just like a force of nature and allergies she's here to stay, which was also the inspiration behind ...
TshisaLIVE
4 years ago

Even though Pinky Girl who became a household name through Bonang's reality show is determined to make it in the world of showbiz, getting used to ...
TshisaLIVE
4 years ago

'This work will eat you alive,' says Masasa Mbangeni on acting

After being in the industry for more than a decade, actress Masasa Mbangeni has opened up about the emotional struggles that actors go through behind ...
TshisaLIVE
4 years ago