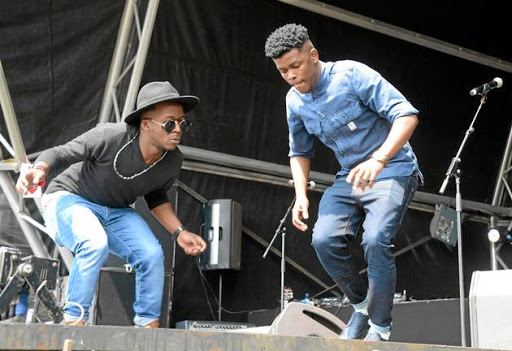 Black Motion claim they were escorted from their flight after being targeted because they are black.
Image: FRENNIE SHIVAMBU/GALLO IMAGES

Award-winning music group Black Motion are seeking legal advice after they were allegedly escorted by police off a British Airways flight to Johannesburg on Monday following an apparent racist incident.

A representative for the dance duo has told TshisaLIVE Thabo "Smol" Mabogwane and Bongani "Murdah" Mohosana were booked into business class and seated when an air hostess asked them to move to economy as a white woman's seat was broken and she needed to move.

Mabogwane and Mohosana questioned why they were singled out to move to economy over other passengers in business class and were apparently told their tickets were "worth less."

"The fact is that there were only two black people in economy and they were asked to move. When they asked why they were being chosen, they (the air hostess) told them their ticket was cheaper. We asked them why they were not accommodating us and they said they were doing so by putting us in economy," said Black Motion's road manager, Nicky Seema, who was also on the flight.

Seema, who was seated in economy class, said he went to join the duo to investigate what was going on and "things got heated" as they questioned why they were being moved.

The air hostess then allegedly went to inform the captain of the situation and returned to tell Mabongwane and Mohosana that the captain was having them removed as they were "aggressive" and he "was avoiding a 911."

It was then that police allegedly came on board the flight and escorted Mabongwane and Mohosana off the flight. Seema, and another colleague, voluntarily joined them.

Seema claims that once the crew discovered that Mabongwane and Mohosana were famous, they apologised and offered to get them onto the next available flight.

"They said that it was not about race but the truth is this only happened because they did not know they were Black Motion and they saw two boys and thought they could undermine them."

In a statement to TshisaLIVE British Airways said it was investigating the incident.

"We have been made aware of this incident. Comair and British Airways will not tolerate racism. We regard these allegations as very serious and they thus warrant thorough investigation. We will establish what happened and take whatever action is required,” said Comair's Shaun Pozyn.

Mohosana, meanwhile, took to his Instagram account to speak out about the incident, insisting that they had been asked to move simply so that a white woman could be comfortable.

SAPS spokesperson Brigadier Vishnu Naidoo told TshisaLIVE that they have no record of police removing anyone from an aircraft on Monday.

Despite numerous attempts by TshisaLIVE, Airports Company South Africa could not be reached for comment at the time of publishing this article.

'But guess what, it's graduation day today' - People's Bae to non-believers

After having to wait for a few months for the official ceremony, EFF spokesperson Mbuyiseni Ndlozi, aka the People's Bae, will on Tuesday have his ...
TshisaLIVE
4 years ago

'His victory is our victory' - Ntsiki shuts down Cassper hater

While congratulatory messages continue to pour in for Cassper Nyovest after he made his dream to #FillUpFNBStadium a reality, there are still a few ...
TshisaLIVE
4 years ago

Skolopad strips naked for some of her most daring snaps yet!

Skolopad once again left fans shocked on Tuesday morning when she took to social media to post pictures of herself meditating completely naked.
TshisaLIVE
4 years ago

What a champ! Black Coffee surprises his mom with a new Mercedes SUV

International music star DJ Black Coffee gave his mom the surprise of her life on Monday when he gifted her with a new Mercedes-Benz GLC SUV.
TshisaLIVE
4 years ago

AKA has applauded his rival Cassper Nyovest for filling up FNB Stadium in Johannesburg on Saturday, saying it was the Doc Shebeleza rapper's moment ...
TshisaLIVE
4 years ago