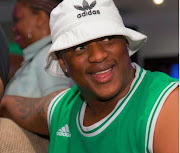 Image: Via Jub Jub Instagram Rapper Jub Jub has opened up about adjusting to life after being released from prison and his renewed purpose in life.

Walking into the interview room at Tiso Blackstar offices, Jub Jub wore dark shades and spoke quietly on his phone. Having watched most of his other interviews since Jub Jub was released on parole in January, I knew that the rapper had aspects of his life that was considered "no go areas".

This interview was either going to be lame or flames, no in-between.

As we sat down to get started, Jub Jub was glad that I knew this, and was prepared to shut down some questions. The rapper even casually pointed out that he isn't comfortable around the media.

Still, Jub Jub is prepared to share his story as it's important in the process of rebuilding his life and career.

Even though Jub Jub has been out of prison for almost a year now, he tells us how he is afraid of social media.

"People will always have something to say, and the reason I am scared of all these things is because I see what Black Twitter does to people and it's not a lot of people that are strong like that."

The rapper, who made it clear that he's not a fan of blurred lines especially where his personal life is concerned, said social media made it hard for a person to keep their private life away from the spotlight.

The rapper was convicted, together with Themba Tshabalala, of culpable homicide in 2012 after crashing their cars into a group of school children in 2010, leaving four children dead and two others brain damaged.

Even though it has not been an easy journey, Jub Jub said that he's had to forgive himself so that he can move forward.

The rapper said that in every interview that he's done since being released in January he was asked about the accident, and his time in prison.

He made it clear that he doesn't like talking about the accident out of respect for the parents who lost their kids. The rapper said it just "wasn't fair" for the parents of the children who were killed and left severely injured to relive their pain every time he has an interview.

Everyone has opinions about him, and he knows that. But the Jub Jub sitting in front of us is a different version of the man who was convicted four years ago, he said.

Jub Jub said that he had a renewed purpose to positively impact the lives of young people and spoke proudly about establishing his Jub Cares foundation.

Through Jub Cares the rapper does philanthropic work that includes school visits and motivational talks among other things.

"Right now, having dedicated my life (to what matters most to me)...my team and I, we've opened up Jub Cares foundation. (Because) I really didn't like what I saw when I came back. You know, the way young people are affected by drugs and everything that is going on due to social issues. Jub Cares is a passion project and I have a deep desire to make sure that I make a difference with our youth, one child at a time. For me, that brings me peace..."

Back to the music

In addition to helping to make a difference among young people, Jub Jub wants to share his in a book, a movie and most importantly his music.

The Ndikhokhele hitmaker said music has always been a spiritual thing for him and because of that he would always use it as his tool to fulfill his purpose. He recently released his single Awesome God, in which he reflects on role God has played in the story of his life.

"There's more to life than what I went through, there's better yet what I have to teach people and what they have to learn from my experiences."

The music video for Awesome God will be dropping in two weeks' time while his fans can expect his well-anticipated album in February 2018.

Hip Hop artist Jub Jub spoke to TshisaLive about forgiveness and moving forward after he was released from prison.