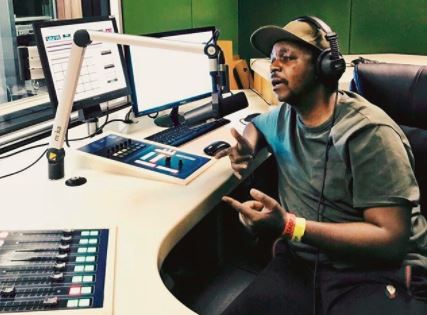 Oskido has asked to meet with DJ Maphorisa over comments the musician made about rapper Cassper Nyovest.
Image: Via Instagram

Music veteran and mogul DJ Oskido is set to play the role of peacemaker after he asked DJ Maphorisa to meet with him over comments the star made about Cassper Nyovest on social media this past weekend.

Maphorisa found himself on the Twitter trends list after he claimed that Cassper had lied about selling 10 million records and shaded his achievements.

Responding to Cassper's announcement about the milestone, Maphorisa posted a series of tweets questioning the achievement and asking Cassper not to "lie" to fans.

Cassper blocked Maphorisa on Twitter and told fans it was easier than responding to every shot aimed at him.

While fans quickly chose sides in the argument, Oskido took to Twitter to give Maphorisa advice and warn him to not let the devil deceive him.

Speaking to TshisaLIVE, Oskido said that he had seen Maphorisa's tweets to Cassper and asked if they could discuss the matter when the DJ returned from Nigeria

"It was very out of character and I called him to ask him if we could discuss it when he gets back. We have worked together for many years and I don't know him to be like this. I see he stopped after we spoke, so maybe that was it," Oskido said.

He added that they would meet and then go into studio together to work on new music.

"We have worked together for many years," he added.

Oskido has previously been the peacemaker in several high-profile feuds, including in settling an argument earlier this year between Police Minister Fikile Mbalula and sports' presenter Robert Marawa.

Posting a picture on social media of the pair together, Oskido wrote: "conflicts and fights are a result of a failure to sit down and talk. This often leads to undesirable drama. It's good to see two people I hold highly, Robert Marawa and Minister of Police Fikile Mbalula, hug and make up after talking. To quote Gandhi - "And eye for an eye will make the whole world blind". Peace Ma'Gents."

Last year, DJ Zinhle took to Twitter to reveal that when her ex-boyfriend AKA had lambasted her on social media, Oskido was one of the friends that called and begged her not to respond.

It may be third time lucky for veteran actress Sophie Ndaba who reportedly eloped with wealthy Joburg businessman Max Lichaba, in a secret Italian ...
TshisaLIVE
4 years ago