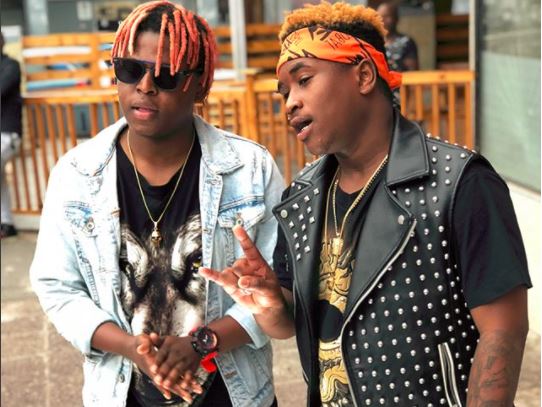 Gqom producers Distruction Boyz shut down a hater with a swift clapback.
Image: Via Instagram

Being in the spotlight comes with its own set of challenges, which includes getting hate messages on social media, but Destruction Boyz definitely isn't about that life.

When one follower compared the duo to award-winning group, Black Motion, they sent her running for the hills.

It all started after the person shared how she thought Black Motion could 'destroy' the duo without much effort.

The boys, who were clearly not interested with the comparison, responded with a stinging clapback.

"They are very dope and we respect them soo much," read part of their tweet.

Que and his bandmate Zipho 'Goldmax' Mthembu have impressed Mzansi with their album Gqom is The Future. Gqom is a genre of dance music popular in Durban, only made mainstream recently.

"People love our music and our digital sales have been amazing. We are number one across the country," Que said earlier this year in an interview with TshisaLIVE.

We are young. We play a different sound. We are learning. They are very dope n we respect them soo much. We've never claimed to be better but we are working very hard to grow. Have a lovely festive season🙏🏿 https://t.co/m2elHMMKVJ

The boys' spicy reply earned them more respect from their loyal fans who have already dubbed them a "national treasure" because they  have given them December anthems.

Lockdown's Monde had fans eating out of the palms of  her hands with her slick and seduction skills on Monday night's episode of the show.
TshisaLIVE
4 years ago