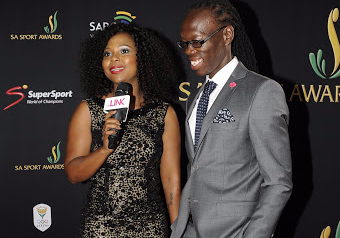 Just over two years after getting back together following a brief split, sports presenter Mpho Maboi and footballer Reneilwe Letsholonyane have finally tied the knot.

Mpho revealed on her Metro FM radio show with DJ Fresh on Friday that she recently got married to her longtime partner in a secret ceremony.

Fresh and the rest of the station's breakfast show team all shared their surprise at the announcement and teased that she was not married last week and they had not been invited to the wedding.

Speaking to TshisaLIVE, Reneilwe was shy to go into details of the wedding and said that we should call next week.

Speaking about weddings earlier this year, Mpho said the couple would not have a white wedding

Mpho and Reneilwe have previously been asked when they would tying the knot, which led to Mpho telling Touch HD's Arye Kellman that they would get married when they were ready.

"For me, I feel like it's not the end point for everyone. Not everybody wants to get married, the whole marriage thing, can we not shove it down people's throats.  We'll get married, when we get married, If we choose to get married. For all I know this (Reneilwe) could be my life partner and I'm content with that." she said in January.

South African film Inxeba (The Wound) has strengthened its chances of winning an Oscar at next year's prestigious ceremony after being shortlisted ...
TshisaLIVE
4 years ago

Suzelle DIY invited Tali Babes onto her YouTube show so that they could make a wedding cake ahead of Tali's big day.
TshisaLIVE
4 years ago

Kwesta gives a shout out to Stogie T amid heated 'beef'

While there's enough beef to go around in the hip-hop fraternity to last a lifetime, Kwesta has always been about comradery and gave Stogie T a pat ...
TshisaLIVE
4 years ago

Early Thursday morning, Skolopad's fans found themselves confused after the 32-year-old tweeted that when she grew up she wanted to be a "slut" but ...
TshisaLIVE
4 years ago

Just hours after Cassper Nyovest lambasted Tumi "Stogie T" Molekane at the SA Hip-Hop Awards, Riky Rick took to Twitter to claim that Tumi had no ...
TshisaLIVE
4 years ago