DJ Tira: Zodwa Wabantu's language will be 'cleaner' in 2018 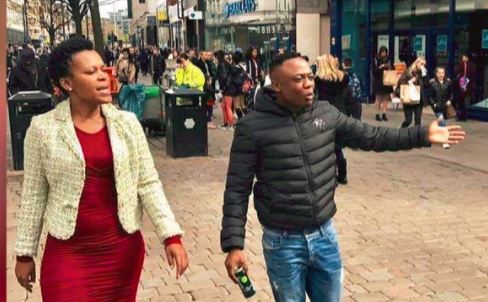 Zodwa Wabantu and her boss DJ Tira have met to discuss her 'strong' language.
Image: Via Instagram

Record label boss DJ Tira has stepped in to put out the flames, after Zodwa Wabantu received backlash on social media over her "vulgar" language.

Zodwa landed in hot water after a video of her giving a speech over the festive season went viral.

In the video, Zodwa told women that they should not shy away from using female persuasion.

After being inundated with complaints, Tira called a meeting with Zodwa to discuss a way forward.

"We've just had a brief meeting about a way forward because we've heard your complaints, especially on social media, that Zodwa's language is too 'strong'."

Tira said he hoped that Zodwa would change the way she speaks and rather speak to "inspire" people.

"In 2018, Zodwa Wabantu will change her language but I won't change, you'll still get the same Zodwa, she ain't going nowhere. You are going to see her on your small screens, thank you so much for the love and support. I know I express myself differently but thank you so much," Zodwa said.

Watch their meeting below:

Although Zodwa has never been shy to share her "unfiltered" opinions she seemed remorseful in the video.

Zodwa previously told TshisaLIVE that she was free to do and say whatever she wished, because no one has power over her

Like most of us, Somizi is also feeling the after effects of the festive season.
TshisaLIVE
4 years ago

IN MEMES: OPW bride confesses she cheated to get hubby's attention

Our Perfect Wedding bride, Hope, was dubbed a leader by Twitter after she confessed to cheating on her boyfriend-turned-husband to get him to propose.
TshisaLIVE
4 years ago

Fans of popular reality dating show, Date My Family, were in stitches on Sunday after watching nurse Nonceba try her luck at finding love.
TshisaLIVE
4 years ago

The estimated cost of repairing at least 28 schools damaged by the storm and vandalism has been put at R140-million‚ the department of education in ...
News
4 years ago

Kgomotso Christopher's body is everything

It's not very often actress Kgomotso Christopher gives us a glimpse of her body, but we're grateful she blessed us with this one rare snap. Kgomotso ...
TshisaLIVE
4 years ago