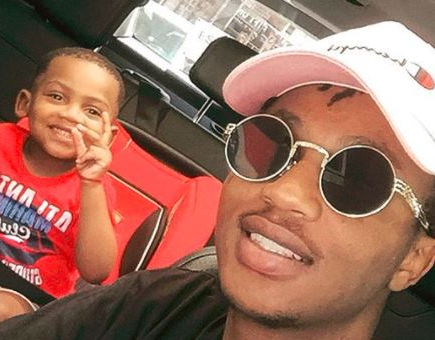 Emtee is about to be a dad to baby number two.

Emtee is looking forward to becoming a dad for the second time, saying he felt this time should be a lot easier because of lessons learnt, growth and financial stability.

Emtee and his girlfriend, Nicole Chinsamy already have a two-year-old son named, Avery together will be welcoming another boy into their brood.

"There's not much that is going to be different, I guess, except now I have a lot more knowledge of what it kind-of takes to raise a child. I'm definitely sure it will be a breeze, you know with lessons learnt and all from raising Avery," he told TshisaLIVE.

The Roll Up hitmaker broke the news of his girlfriend's pregnancy in an interview with Drum, where he revealed his second son was due on January 20.

"I have grown as a person as well, to understand that I have responsibility and to know that whatever that needs to be done will be done. I'm a hustler and my children won't lack anything."

The 25-year-old  said he wasn't certain how many children he wanted and would let mother nature and God decide. He said he was just looking forward to being a 'great' father to his sons.

He said they (him and his girlfriend) have told Avery that he'll have a new "play buddy" soon. However, even though it seems he doesn't understand, his excitement is evident.

"I don't think he (Avery) understands yet but he sure is excited. The rest of the family is also so happy for us, from my family, to my girl's family. Everyone is excited."

MTV's hit reality show Siesta Key has taken the world by storm and made cast member Juliette Porter one of the most recognisable faces on the ...
TshisaLIVE
4 years ago