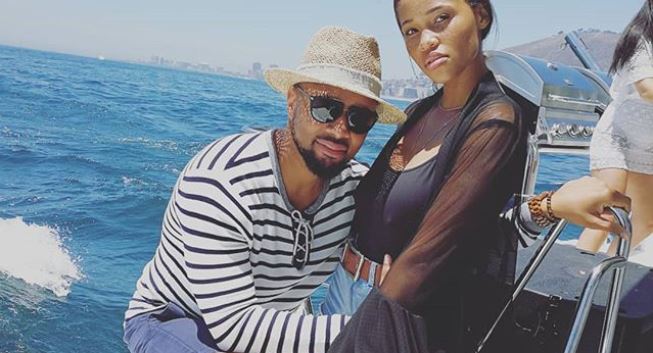 Palesa has opened up about her love for Phat Joe.
Image: Via Palesa's Instagram

Phat Joe's fiancée, Palesa Morgan, has revealed that she prayed for a husband like the popular radio and TV host just months before they met.

In an Instagram live video this week, Palesa told fans that she had been taught to pray her goals into existence, a technique which she believes helped her find Joe.

"I do this mediation over what I really want God to do for me in the new year and I promise you guys it works. I have been doing this since the year I met Joe. We met after I put on a prayer list: 'God. I want a husband', and I met him two months later."

She went on to explain that it was love at first sight.

"I knew when I met him that I was going to marry this person. It has been amazing," she added.

Palesa and Joe have been mum about their wedding plans since they announced their engagement in October 2016.

Joe told TshisaLIVE at the time that a video he made to propose to Palesa was created to try make their engagement timeless.

"It was just meant to be something timeless that she could always watch over and over again."

Take a look at the engagement video below.

Almost three and a half years after footballer Senzo Meyiwa's death, his family is still struggling to raise enough money to finish the house the ...
TshisaLIVE
3 years ago

Minnie Dlamini has strongly slammed rumours that she and her hubby, Quinton Jones have been experiencing trouble in paradise.
TshisaLIVE
3 years ago

Emtee is looking forward to becoming a dad for the second time, saying he felt this time should be a lot more easier because of lessons learnt, ...
TshisaLIVE
3 years ago

Pearl slams EFF H&M vandalism: Just misrepresent us all as savages then

Actress Pearl Thusi has added her voice to the debate around a decision by the EFF to vandalise several H&M stores over the weekend, questioning if ...
TshisaLIVE
3 years ago