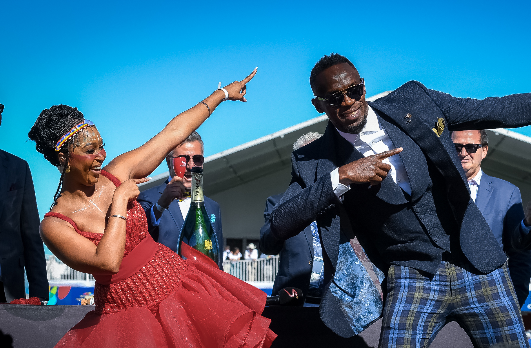 Retired athlete Usain Bolt jetted into Mzansi on Friday ahead of the Sun Met this past weekend and told TshisaLIVE that he felt right at home.

The athlete was flown into the country as part of his duties as GH Mumm CEO (Chief Entertainment Officer) at the glitzy annual horse racing event on Sunday in Cape Town.

Usain said that in many ways Mzansi was like Jamaica and he loved how South Africans had the ability to make people feel "right at home".

"Growing up, my mother always made sure I knew the history of my people, not just Jamaicans but Africans as a whole. When I say Africa is the motherland, it's not just a cool saying, it's really from a place of feeling at home here. Although it took me quite some time to finally come and experience it for myself but thanks to my sponsors I am here and it feels like I'm just in time."

Usain said that as soon as he arrived in the country he got the chance to party at a few clubs where he fell in love with SA music.

"I love the saying, 'South Africans know how to have fun' because it's not like everything is perfect but they know how to find joy in the simplest things."

Usain, who officially retired from athletics in August 2017 said he was sad when he crossed the finish line for the last time, but was encouraged by the successful career he enjoyed.

"Retirement hasn't totally been 'easy' because I have been flying all over the world because I have a great team of people helping me. So the brand of Usain Bolt, the athlete will never die and through it, I hope others, including SA, will be helped through the initiatives that will be announced later."

The former sprinter also revealed that he was looking forward to launching his soccer career. Usain said he had trials coming up in March and aspired to eventually play for one of the big teams.

WATCH: Rihanna heats up the Grammys stage with the Gwara Gwara

When Rihanna took to the Grammy Awards stage on Sunday night the last thing local fans expected was to see her pull off South African dance move, the ...
TshisaLIVE
4 years ago

Legendary jazz musician Oliver Mtukudzi, who already has 66 albums under his belt is ready to give fans his 67th offering that is packed with "life ...
TshisaLIVE
4 years ago

The fashion at the Sun Met this past weekend was daring to say the least, and one of the people that went all out was South Africa's 'diamond' Minnie ...
TshisaLIVE
4 years ago

Actor Nkosinathi 'Nay Maps' Maphalala has stolen the hearts of TV audiences across the country for his role as Mxolisi Xulu on Uzalo but the star ...
TshisaLIVE
4 years ago