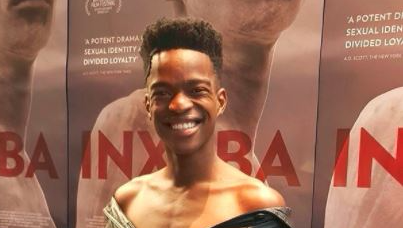 The Wound (Inxeba)'s Niza Jay posed for pictures at TshisaLIVE's special screening of the film.

Ahead of the highly-anticipated South African premiere of The Wound (Inxeba), TshisaLIVE hosted a special pre-screening of the film which attracted a star-studded audience.

Producer Elias Ribeiro and one of the lead actors, Niza Jay, who plays the character of Kwanda in the film was also at the screening and encouraged people to support it.

"It is important for our communities to watch this film and I really believe a lot will change in the industry. When you create something you are passionate about people will always talk," said Niza.

The pair along with film writers Malusi Bengu and Thando Mgqolozana also tackled a few questions from the audience.

The Wound, which scooped 19 awards across the globe, has attracted both acclaim and criticism from viewers after the movie's "provocative" trailer was released early last year.

It was criticised by traditional leaders and social media users for its portrayal of the Xhosa initiation ceremony.

"85% of people who have attended pre-screenings of the film gave it the thumbs up and think it should’ve been nominated for an Oscar," said Elias.

The Wound opens at local cinemas on Friday, February 2.

Here's a glimpse into what went down:

#InxebaTheWound star @Niza_Jay"it's important for our communities to watch this film. A lot will change in the industry now" pic.twitter.com/BOVSKmf7hZ

Zodwa is here and she can't wait to watch the film. "It's important to embrace our sexuality and be proud of who we are" #InxebaTheWound pic.twitter.com/sOX9P3LGuR

Lasizwe says he's more excited about the kissing scenes in the film😂😂#InxebaTheWound pic.twitter.com/R6M9ectPP7

Zahara and her bae Ian are here tonight "This is a time for Africans to speak. We are judged as Africans and we need to find our voice and correct it" #InxebaTheWound pic.twitter.com/Tx3nOODbJ3

"The film's done a great job of showing the world we've got a lots more stories to tell. It had to be told!" Thuso&Makgotso#InxebaTheWound pic.twitter.com/57chdBVpu2

Producer Elias Ribeiro "There has been a lot of talk about the film but we hope that people will take the time to see it. It is important for the world to start talking about these issues" #InxebaTheWound pic.twitter.com/I3bfjkYmjE

" It's important for the world to know about our culture and this film will push the boundaries" Bernard Parker #InxebaTheWound pic.twitter.com/PbcyeAsGKt

"It's really important for me to be here tonight because this a film all South Africans should support" @queenskolopad #InxebaTheWound pic.twitter.com/zuexvGXsx9

Ntando Duma surprised Mzansi when she released a gqom track late last year but the presenter has revealed that she has big plans for the blossoming ...
TshisaLIVE
4 years ago

Emotions ran high at the Scandal! studios in Johannesburg on Wednesday afternoon as friends, fans and family gathered to pay tribute to veteran ...
TshisaLIVE
4 years ago

Skeem Saam returns to SAFTAs despite boycotts over voting procedures

Trompies: We've come to accept that Mahoota doesn't perform with us anymore

Trompies' Spikiri said the veteran music group were a little frustrated when member DJ Mahoota decided to no longer perform live with them, but said ...
TshisaLIVE
4 years ago