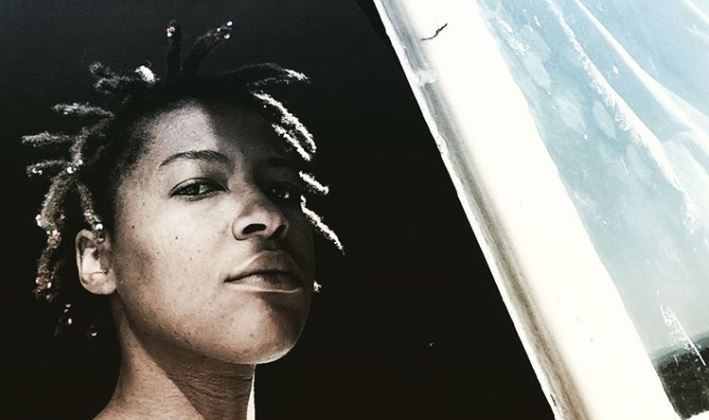 Yugen Blakrok was featured on the soundtrack for Marvel's Black Panther.
Image: Via Yungen Blakrok's Instagram

For many SA music fans, the first time they had heard of Yugen Blakrok was when the star-studded tracklist for the Black Panther movie was released late last week, but the Joburg-based rapper has been around for a while.

Yugen may be known to a small amount of local fans, but the artist has been capturing the world's attention for long before her upcoming collaboration with Vince Staples on the project. She recently finished her third European tour and has worked with several artists across Europe and America, including Poetic Death.

"I have toured with a number of international artist and I have fans overseas, but I think I have quite a niche market in South Africa, a small following of people. I have been labelled an underground artist and I have come to accept that because I think that is where I get my creativity from. That is where my music is better received. I have had exposure to South African radio and media, but I think sometimes certain politics are at play, and as a independent artist, it can be hard to be on the same level as more established artists."

Despite her impact on the underground hip-hop scene, Yugen did not always plan to be a rapper, explaining that her journey from social poetry took a turn when she wanted to express herself on a new platform.

"In the beginning I didn't consider it as a career. I was just drawn to the militant nature of it in the 90s. I used to be into poetry and eventually I got into hip-hop as a different platform of expression. I found references to the world in it and an education. My content does seem to fall into reflection and contemplation on our social and emotional state as a nation, and my own personal experiences. I am just trying to connect with my audience on a different level."

It was this social-awareness and courage to speak out that saw her sign up for a mystery project that would later turn out to become the Black Panther soundtrack. She explained that she was approached to work on a project and immediately started recording for it. It was only a few months later that she discovered she would be on the same album as Schoolboy Q, The Weeknd and Kendrick Lamar.

"I couldn't believe it when they told me what the verses were for.  I was overwhelmed. I was excited. I went through so many emotions and it still feels like I am in a bit of a haze. I am waiting for the soundtrack to drop on Friday and it's surreal."

Producers of controversial local film The Wound (Inxeba) have responded to threats which cancelled several screenings of the movie this past weekend ...
TshisaLIVE
3 years ago

Bonnie Mbuli to bare more of her life in second book

After her first memoir, Eyebags & Dimples left readers with many unanswered questions, Bonnie Mbuli has revealed that she's working on a second book ...
TshisaLIVE
3 years ago

Loyiso Bala calls for Inxeba to be banned, Twitter roasts him

While the director, actors and producers of Inxeba (The Wound) called for calm over the weekend after some cast members and movie-house staff ...
TshisaLIVE
3 years ago

Even if you were having a bad day, you can be guaranteed of that changing when Carpo is around.
TshisaLIVE
3 years ago