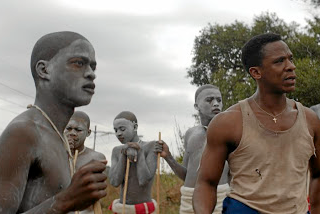 A scene from the South African movie 'Inxeba' (The Wound), which is described as being a love story involving two men.

The South African Human Rights Commission (SAHRC) has called on people to exercise their constitutional right to protest against controversial film, Inxeba (The Wound) in a lawful and constructive manner.

Producers of Inxeba laid an official complaint with the SAHRC after cinema houses cancelled screenings of the movie amidst threats of violence since its release last Friday.

The film, which tells the story of a gay factory worker who travels to the rural Eastern Cape to oversee the Xhosa initiation process only to have his secret discovered by one defiant initiate, has caused a raging debate.

In a statement issued on Wednesday morning, the SAHRC confirmed that it had received a complaint about the cancelled screenings.

The commission pointed out that it was mindful that the constitution recognises freedom of expression.

"The Commission is mindful that the rights to culture, dignity, protest and freedom of expression are protected in our law. Our protections are similar in nature to protections for these rights globally," said SAHRC spokesperson Gail Smith.

The SAHRC said people should remember that exercising a right should not infringe on another right.

"The right to protest is also protected by the Constitution.  However, the right to protest must be exercised without destruction or violence. Based on the complaint to the Commission and our monitoring of reports of intimidation, threats of violence and death threats made in relation to the screening of Inxeba: The Wound is condemned."

The commission urged people who are protesting against the film and those who are in support of it to exercise their rights in a peaceful manner.

Inxeba director John Trengove said in a statement earlier this week that they were not deterred by the threats.

"Inxeba is not going to go away and we are invested in making sure that people who do want to see the film will get to do so."