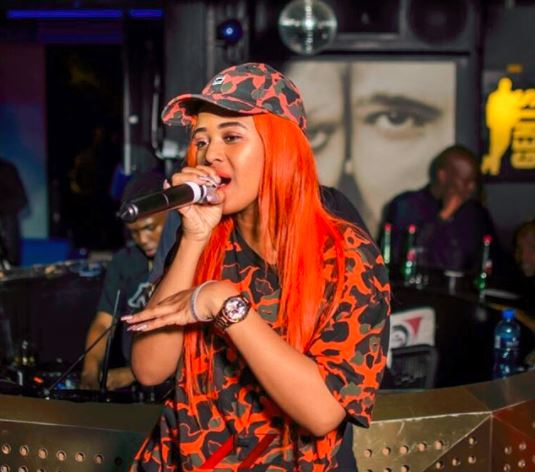 Babes Wodumo's song on the Black Panther film soundtrack has got Mzansi talking.
Image: Via Instagram

As if Mzansi didn't have enough drama with Zuma's future and allegations around Senzo Meyiwa's murder, Babes Wodumo has had the nation shook with a single she recorded for the Black Panther film soundtrack.

Fans were looking forward to finally hearing Babes without her boss Mampintsha after seeing a track listing for the album late last week. Sadly, like most things in Mzansi at the moment, it was not to be, with Mampintsha sneaking his way onto the track to provide backing vocals.

Twitter fans were not impressed and flooded social media with questions asking how the heck this happened!

It’s a Friday and I woke up to find that babes wodumo is a duo 💔 pic.twitter.com/gLGszlUa3M

mampintsha snuck onto this album. damn. if elon musk announced he was going to send babes wodumo to mars, mampintsha would somehow appear from behind a rock as the spaceship lands... pic.twitter.com/VGJkZi9AgS

"Babes" is plural tho.... not? 🤔🤔
So Bongekile is 1 Babe, & Mampintsha is the other Babe. & Together they are BabeS Wodumo.
Why are we tryna complicate things? 💁🏾‍♀️😒

How the hell did Mampintsha manage to worm his way into Babes Wodumo's #BlackPanther sound track!? 😕😕
😂😂😂 pic.twitter.com/5Gpl25BL4B

So Babes Wodumo is a duo pic.twitter.com/BhsHP5md6N

Many were less impressed by the fact that Babe's lyrics on the track can basically be summarised into two phrases: "oh my word" and "kikiritiki".

Can we get subtitles over here?

Babes Wodumo was also surprised that Babes Wodumo is a Duo hence "Oh My word Oh My Gosh" pic.twitter.com/9bzGk1CIvC

If you haven't yet heard what all the fuss is about, put your earphones on and give it a listen below.

Polygamist Musa Mseleku has confirmed that his second wife MaYeni did ask for a divorce and although he couldn't go into detail, he's revealed that ...
TshisaLIVE
4 years ago

After having the wrath of Twitter fall down on her for trying to enter the discussion around Senzo Meyiwa's unsolved murder, Skolopad has come out to ...
TshisaLIVE
4 years ago

Music producer Chicco Twala has once again weighed in on the mystery surrounding Senzo Meyiwa's death, claiming that he did not personally believe ...
TshisaLIVE
4 years ago