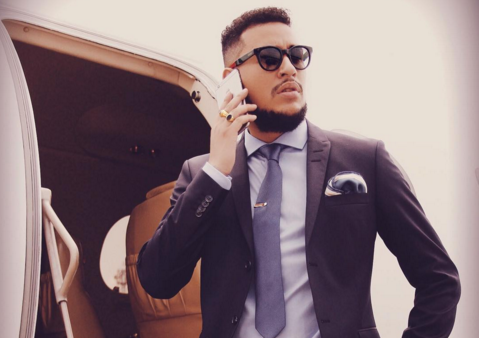 Now you can drink Vodka with AKA's name on it.

AKA may just be serious about this whole retirement thing after all. Just days after claiming his next album would be his last and that he was looking to get coins elsewhere, the star has bagged a mega money deal, to put his name on bottles.

As if his "seven-figure" deal with Reebok didn't make him as guaped as a Gupta, AKA has added to his bank balance with a massive Cruz Vodka deal to have his own AKA branded range of alcohol.

The juice comes in watermelon flavour and is currently being bottled to be sent to shelves (and blessers' tables) across the country soon.

The Supa Mega posted a video of the bottles in production, giving us all a glimpse of its gold caps, and pink and black branding.

Endorsement deals are not enough. It's time to get it by the bottle 💸 ... @cruzvodka Watermelon 🍉... by AKA. #BeamTeam pic.twitter.com/reabgMjxuG

AKA being AKA, couldn't help but throw shade while he celebrated his success, explaining how the deal was not about taking pictures overseas like some of his other celeb friends.

With this move @Cruzvodka is doing what these other brands won't do. Actually place faith in our own, with REAL INVESTMENT. Not send me on trips to take pictures. What a successful partnership its been for both of us. 🙏🏼 Thank You.

Eish, wonder who that sub tweet was aimed at?

Anyway, it seems like the star is serious about waterproofing his bank balance, especially after his management told TshisaLIVE earlier this week that his next album, Touch my Blood, would be his last.

"Yup. This is it. This is his last album. He wants to do other things with his life beyond music. He is a father and a businessman. He has a company to run and he will be focusing on that and other projects. He will always be AKA and will dip in and out of music."

The ward of words between DJ Shimza and Prince Kaybee became more toxic than a nuclear power plant on Thursday, after Shimza dismissed Heavy K's ...
TshisaLIVE
3 years ago

WATCH: Haters got the better of Zodwa - she bought underwear!

In what can be dubbed as a moment of weakness, Zodwa Wabantu u-turned on her 'no underwear' policy and gave in to haters by buying underwear.
TshisaLIVE
3 years ago