MaKhumalo Mseleku says it's 'normal' for good wives to compromise 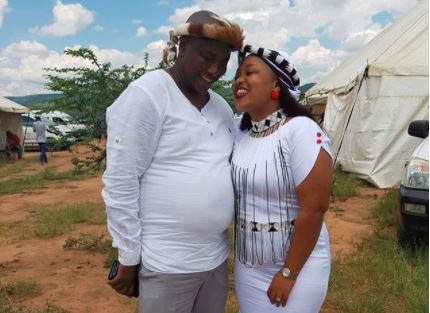 Thobile aka MaKhumalo is the third wife of Uthando Nes'thembu's Musa Mseleku.
Image: Via Instagram

Uthando Nes'thembu's MaKhumalo has said that as one of Musa Mseleku's four wives she is always happy and insists she does not over-compensate for the sake of the show.

She told TshisaLIVE she was who she was, despite fans of the show believing she was putting up a show for the sake of the cameras.

"I won't change who I am for the sake of the reality show. What people see there is my true character. It is who I am. People who are always with me, they know and I am not interested in going around trying to paint a different picture of who I am."

MaKhumalo, whose full name is Thobile Mseleku (née Khumalo), explained that as a married woman, the concept of compromising and sacrificing was normal for the sake of building her family.

She said it didn't mean she was putting her happiness on hold, instead she was willing to consider everyone's happiness as it affected hers directly.

"I am married and in any marriage you need to compromise. I am building a family and it is important to know that sacrifices and compromises are necessary at times. I value my family and would much rather have people close to my heart happy and at ease to spend time with me. The whole point of a polygamous lifestyle is to create an environment where all of us can find a way to be happy."

So to those of you who think this...

MaKhumalo and always being the understanding one 😔🙄 #Uthandonesthembu pic.twitter.com/6rAT4KGFNZ

... know that MaKhumalo isn't bothered by those accusing her of being fake.

She told TshisaLIVE people that who don't want to understand why she's a "happy soul" don't bother her at all.

"Life is too short. I made a decision a long time ago that I would lead a happy life. My happiness is my responsibility and if others benefit from it, that's fine. If they don't, that's also okay."

Basically... here is her response!

Gear up, Mzansi! We are in for a hell of a ride as the feud between Zodwa Wabantu and a young dancer from Gauteng heats up.
TshisaLIVE
4 years ago

Ncaw! Nandi Madida wasn't big on the marriage thing, till Zakes came along

Nandi Madida may be happily off the market but the presenter has shared that she didn't always think marriage was her "thing".
TshisaLIVE
4 years ago

Someone come clean the crumbs because it just gets more and more messy.
TshisaLIVE
4 years ago